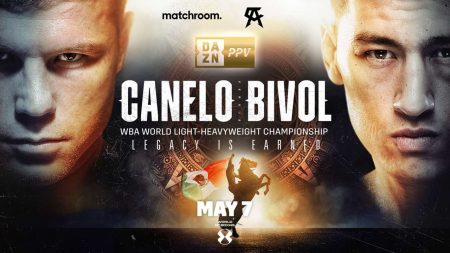 Saul ‘Canelo’ Alvarez is making his much-anticipated return to competitive action on May 7th as he takes on undefeated champion Dmitry Bivol at the T-Mobile Arena in Las Vegas.

It’s set to be a fascinating bout between two closely matched competitors and with a decent undercard featuring Filip Hrgovic vs Zhang Zhilei, it looks set to be one of the most watched sporting events of 2022. It’s an incredibly exciting time for boxing fans and following Tyson Fury’s victory over Dillian Whyte, this 12-round light heavyweight title clash is yet another high-profile event that is likely to attract viewers from all over the world.

Can Saul Alvarez Continue His Ascent?

Saul Alvarez has enjoyed a hugely impressive couple of years and recently claimed the WBO Super Middleweight title from Caleb Plant. He became the first Mexican to simultaneously hold all four belts from the separate governing bodies and he’ll be determined to add yet another to his extensive collection in Nevada.

Unsurprisingly, the 31-year old has been priced up as the odds-on favourite to extend his winning streak. Having seen him rise through the grades, established online bookmakers and new betting sites understandably appear to be taking very few chances, however, there will be many punters who are unlikely to be put off by the Mexican’s prohibitive odds. Having dominated the middleweight category, Alvarez’s astonishing progress looks set to continue and he is showing very few signs of slowing down.

Having won 57 of his 60 bouts, the Mexican will take some stopping and his Russian opponent may not have enough to prevent him from claiming his 40th KO.

Can Dmitry Bivol Make it Tough for his Opponent?

Although he’s been involved in significantly fewer fights than Alvarez, Dmitry Bivol remains unbeaten. He’s won all 19 of his bouts, including 11 KOs and has held this belt since beating Trent Broadhurst in 2017.

Bivol is likely to make this bout extremely tactical and may try to limit the movement of his opponent. His attack and retreat style has helped him to retain his unbeaten record so far, however, it remains to be seen whether his favoured approach will work in Las Vegas. Canelo is seemingly operating at a level above some of Bivol’s previous opponents and this will be his toughest assignment yet.

Bivol has taken time to compliment his opponent, however, he’s also pointed to the fact that Alvarez is beatable having already been defeated by Floyd Mayweather back in 2013.

Will the Fight go the Distance?

These two are closely matched and this bout is unlikely to end prematurely. In previous fights, Alvarez has upped the ante as the rounds progress, and that could spell danger for Bivol. The Russian is a typically fast starter, however, his energy levels have noticeably declined in the final couple of rounds.

Pound for pound, Alvarez is the best active boxer in the world and he is going to take some stopping. He continually talks about his ‘legacy’ and has a determination to succeed and continue to climb the weight divisions. With that in mind, he is likely to edge this.

Bivol is likely to make it tough for the progressive Mexican, however, the unstoppable Alvarez looks set to justify his extremely short odds.