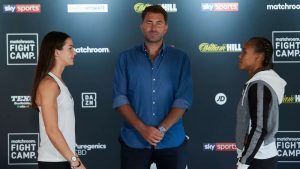 Terri Harper (10-0, 5 KOs) and Natasha Jonas (9-1, 7 KOs) both made weight. This fight is contesting Harper’s WBC and IBO super-featherweight titles, a historic event with both fighters hailing from the UK.

Fowler weighed in at 11st 1lb 7oz (155lbs 7oz), but also looked drawn for someone whose natural frame is big for super-welter.