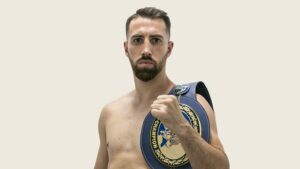 Matchroom Boxing Spain will return to the Pabellón de la Vall d`Hebron in Barcelona on Friday March 26 for a huge night of European Title action as local favourite Sandor Martin puts his Super-Lightweight crown on the line against Kay Prosper and Featherweight Champion Andoni Gago defends his Featherweight belt against Gavin McDonnell, live on DAZN.

Barcelona’s Martin (36-2, 13 KOs) claimed the European 140lbs Title by dominating Italy’s Andrea Scarpa and becoming the first man to stop him in July 2019, before widely outpointing Britain’s former champion Joe Hughes when he headlined the first-ever DAZN show from his home country in December that year.

Luton’s English Champion Prosper (14-1-1, 7 KOs) beat Sam O’Maison at London’s iconic York Hall in September 2019 at the second time of asking to become the town’s first ever national champion. ‘Special K’ had missed out to O’Maison earlier in the year, with a controversial draw, but the now 36-year-old took the rematch unanimously on points to claim his first professional Title.

Doncaster’s two-time Super-Bantamweight World Title challenger McDonnell (22-2-2, 6 KOs) attempts to become a two-weight European Champion after winning and defending the 122lbs Title in 2015. The 34-year-old is looking to revive his career after moving up in weight following his loss to Daniel Roman in Chicago in 2018.

Also on the card, Torrelavega’s European Super-Welterweight Champion Sergio ‘El Nino’ Garcia (33-0, 14 KOs) keeps busy as he looks to defend his Title later in the year and Bilbao’s former European Welterweight ruler Kerman ‘Revolver’ Lejarraga (31-2, 24 KOs) aims to make it four wins in a row since losing his belt to David Avanesyan.

Matchroom Sport Managing Director Eddie Hearn said: “This is a huge card for Spanish boxing and we can’t wait to return on March 26. As Matchroom Boxing continues its global expansion, Spain remains a big focus for us and this double European Title card features some of the country’s strongest talents with two hungry Brits looking to come and rip the Titles from them. Don’t miss all the action live on DAZN.”