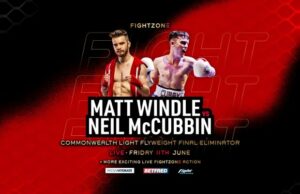 Boxing is full of great stories. Gracing the ring over the years we’ve seen it all, from plumbers to prisoners to preachers … but how about professional poet?

Matt Windle – who headlines on Fightzone on June 11 – is not only a great little fighter, he can also lay claim to being the Poet Laureate of Birmingham … now that’s something you don’t hear often!

A terrific mentor and role model – when he’s not punching for pay, Matt does great work outside the ring delivering poetry workshops in schools, which – in his own words – ‘help young people express themselves, be creative and pursue their passions.’

This Friday the 30-year-old will have his mind on other things when he takes on Scotland’s Neil McCubbin at the Sheffield Arena Car Park in an eliminator for the Commonwealth Light Flyweight crown, in what promises to be a cracking toe-to-toe battle.

McCubbin, 22, is undefeated at 5-0 (1), and believes he will be too young and strong for his Midlands foe.  Windle enters the ring with a 5-4-1 ledger, and is coming in off the back of two unsuccessful attempts at the Midland Area Flyweight Title … although the amiable ‘Brummie’ believes he was hard done by in both those encounters.

Ahead of the bout, ‘MatMan’ says he will deliver entertainment to Fightzone viewers and paying fans, and is promising that McCubbin will be in the toughest fight of his life.

“I enjoy coming forward, making things happen and being entertaining,” explained Matt.  “I’m aware that people are spending their hard-earned money to come and watch me, so I like to try and give them value for money.  I’m usually in pretty entertaining fights.  In the amateurs I’ve boxed in hostile environments, been booed to the ring, but I’m getting applause and pats on the back when the fight’s over.

“I haven’t seen a great deal of Neil, but from what I’ve read he sounds a bit like me – he likes to box, likes to fight. He’s got a good amateur pedigree and likes to work head and body.

“In my last two fights I boxed 10 rounders and thought I did more than enough to win, but the one thing no one could question is my fitness and stamina in the latter parts of those fights.  I’m expecting this to be my toughest fight to date, but I believe it will be his too – one hundred per cent.

“I’m also absolutely buzzing to be headlining on Fightzone; it’s another thing I’ll have ticked off my bucket list.  I’ll be able to look back with great pride and say I headlined a TV show, and I’m positive we’ll put on a fantastic fight.”