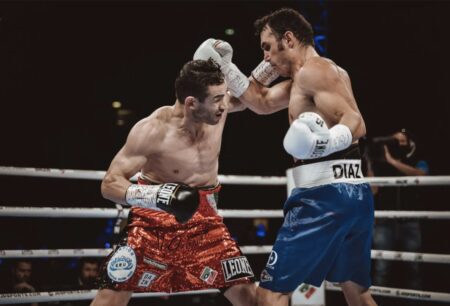 On November 5, in Rome, Italy, European middleweight champion Matteo Signani (military of the Italian Coast Guard) defeated on points Ruben Diaz (Spain) in the main event of the show presented by David Diamante, promoted by Opi Since 82-Matchroom-DAZN and streamed live in 200 countries by DAZN. Signani was more active and delivered more punches than Ruben Diaz who had said that win or lose this would have been his last fight. That attitude and 2 years and 4 months of inactivity led Diaz to produce a bad performance.

Signani always looked in control of the fight and after 12 rounds the scorecards were no surprise: 115-113, 116-112 and 117-111. Interviewed after the win in the locker room by Matchroom You Tube channel, Signani had this to say: “I didn’t perform well, but I was the best man in the ring and the EBU belt is still in my hands. I paid one year of inactivity, but in the second half of the match I improved and gave my best. I want to fight for the world middleweight championship. Defending again the European title against British Commonwealth champion Felix Cash? I know him and he is a talented boxer, but why fighting for the EBU belt when we could both fight for the world title? In Italy, right now, there are many talented fighters. I want to advise them to keep on training seriously to make their dreams come true.”

The fight that stole the show was the spectacular draw between European Union featherweight champion Mauro Forte and Francesco Grandelli. After 12 rounds of non stop action with Forte being the aggressor most times, the judges scored 116-113 (Forte), 115-114 (Grandelli) and 114-114. Mauro Forte keeps his belt and his record moves to 16-0-2. Francesco Grandelli’s record is 15-1-2.