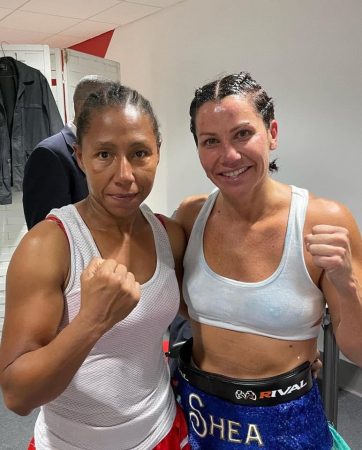 Carnesecca Arena at St. John’s University in the Jamaica section of Queens, New York, USA – 7 May 2022

“The Real Million Dollar Baby” Shea looked as sharp as ever, despite having not fought since January of 2020. Silgado (19-14-3, 14 KOs) had her moments early on, but it was Shea’s body punching and sublime defensive skills which made the difference.

The victory was made even sweeter for the Bronx native Shea because she was was fighting in New York City for the first time since 2010.

“I felt great, I felt that this was where I belonged, I felt very at home in the ring,” said Shea, a former two-time boxing champion.

Shea says she wants a world title opportunity after being unjustly denied one last year by the WBA, despite being the no. 2 ranked contender for the vacant bantamweight title.

“These other girls can’t deny me, the sanctioning bodies can’t deny me. The public is gonna want to see me. Who doesn’t want to see that style and that kind of fight? It would be doing the fans a big disservice. I deserve a title,” said Shea, who is now based in Boca Raton, Fla., where she trains with boxing coach Derik Santos and strength and conditioning coach Phil Daru.

Among the many Shea supporters in attendance was undisputed women’s super middleweight champion Franchón Crews-Dezurn, who had designed Shea’s ring attire for the fight.

Crews-Dezurn says she believes Shea has all the tools and dedication to become a world champion again.

“Maureen is such an intricate part of women’s boxing. She’s broken a lot of barriers and she’s put in a lot of time,” said Crews-Dezurn.  “She’s just an amazing boxer and I’m honored I got to work with her.”

Shea says she hopes to be back in the ring again within three months.