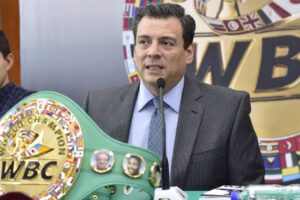 It’s fight week! We are set to witness Saul “Canelo” Alvarez from Mexico facing Callum Smith from England. The WBC vacant super middleweight championship is at stake, a division which has proven to be of great activity and interest in the world, a division which has been dominated by British fighters in its history of existence since 1988. Nigel Benn, Richie Woodhall, Glenn Catley, Joe Calzaghe and Carl Froch have all reigned in this category.

The fight will close a year that has seen so much sadness, heartache, anxiety and uncertainty, but with the great inspiring illumination that this event manages to offer us. A fight that will bring joy and release many pent-up emotions. It is precisely what all boxing fans need, rather, what we all need.

We have to recognize the greatness of both fighters for agreeing to face each other and thus give the world a truly great fight. Alvarez and Smith will be contesting the World Boxing Council Super Middleweight championship, plus the WBA and the recognition of The Ring magazine, as the best in the division.

Callum Smith represents a significant challenge for Canelo, as he is undefeated, possesses experience and will be fighting at his natural weight, in addition to having a lofty height advantage, to the tune of 18 centimeters.

Callum Smith won the World Boxing Super Series tournament in which he earned the WBC Diamond Belt along with the Muhammad Ali trophy. In this tournament he was dominant and beat the then-favorite George Groves. Since that time, he has kept his sights on capturing the WBC championship and has been patiently waiting for the opportunity to do so for over two years.

Smith has ample experience. After being an International WBC champion, he managed to win the WBC Silver Championship and later conquered the aforementioned tournament.

Canelo Alvarez is definitely the most important boxer of today. He is the world leader in boxing, and he is more anxious than ever to get back into the ring since his last fight was in November of last year, when he knocked out Sergey Kovalev. The terrible pandemic stalled ambitious plans that he had laid out. He could not fight on May 5 or September 16, which had been an important tradition for world boxing.

Canelo is a boxer who has trod the WBC path, managing to conquer the championships that our platform provides for boxers to prepare for the World level and greatness.

The WBC is proud that this fight has the super middleweight championship at stake and at the self-same time, we must recognize Turkish Avni Yildirim for his exemplary cooperation in accepting a step aside agreement to allow and facilitate the fight to take place with the guarantee that the winner will face him within the next 90 days.

The fight will take place at the Alamodome in San Antonio, where a capacity of more than 20,000 people is expected, adhering to the strict protocol that is currently required for events with the public in the state of Texas.

Did you know … The World Boxing Council created the super middleweight division in 1988 and the first fight was historic since, in that fight between Sugar Ray Leonard and Donny Lalonde, the super middleweight and light heavyweight world championships were contested. The difference between middleweight (160 pounds) and light heavyweight (175 pounds) was too much, and that is why this intermediate division was created by The WBC, a measure that has proven to be instrumental for the development of boxing as great champions have emerged from this division. Sugar Ray Leonard won the title and successfully defended it against Tommy Hearns and Roberto Duran.

Today’s anecdote … Many years ago, Rafael “Cobra“ Mendoza came to visit my father saying that he had the best prospect in Mexican boxing, a young, red-haired, freckled, shy young man named Saul “Canelo” Alvarez. My dad enjoyed watching this young man develop until he was ready for the world championship. Ranked Number 1 by the WBC, Don Jose agreed to sanction the fight against Matthew Hatton for the world super welterweight title that Manny Pacquiao had vacated. Televisa invited my father to a program. It was supposed to be an interview, but it turned out to be a “trial” where they put my father in the dock as the accused. Ignacio Beristain was the prosecutor, while the jury consisted of Juan Manuel Marquez, Ana Maria Torres and the beloved Dr. Alfonso Morales. Oscar de la Hoya was the promoter of Canelo, and Canelo himself participated by videoconference.

While in the car on our way home, my father was furious. “My son, they deceived me in the most painful way. They set a trap to try to show the boy (Canelo) doesn’t deserve the opportunity, they tried humiliate him and used me in an embarrassing way. You will see, time will determine what this young man will achieve in boxing, he is going to be a champion and he will be the best in the world.”