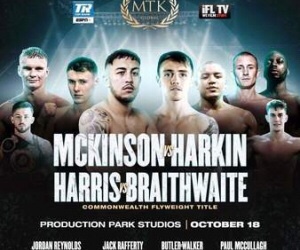 Fight Notes: Harkin was down in rounds one, two, and five but went the full distance. The bout was made at welterweight.

Fight Notes: The fight was scored by the referee 79-73 with the bout made at bantamweight.

Fight Notes: Thomas was down in round three with the bout made at light heavyweight.

“It felt amazing, it has been nearly a year since I haven’t fought,” McKinson said. “I was a bit rusty. I could have jumped on him a bit more when I made him miss a few times, but he was a dangerous guy, an unbeaten fighter. That’s what I do for fun, I take their 0’s for fun. Granted he was not the likes of Chris Kongo or Josh Kelly, but I believe I can compete with those guys and that’s who I want next.

“I have been in the top ten for a 3-4 years. I’m third in the UK and I am beating these guys with ease. I just want the big names, Martin wasn’t a big name but he is probably more dangerous than half those guys. I didn’t need to take that but I am put in a corner because they don’t want to fight me, but those are the ones I am hungry for.

“I believe I am the best welterweight in the UK and I just want to prove it. I think I have deserved the right to box one of those big names, they can’t ignore me forever.

“There are only really four names in Britain that are worth talking about and that’s Josh Kelly, Conor Benn, I believe Chris Kongo is the most likely one to happen but I believe he is looking for a fight with Liam Taylor, so where does that leave me? They want to talk about fighting each other, they want to call out each other’s names, but where does Michael McKinson come into it? I am the realist one of all. Let’s make it happen.”

“I’m looking to push for more world titles, but I have to perform better than that to mix with world level,” Harris said.

“It’s good to have a fight like that. It was a bit sluggish, I got caught with a lot of overhand rights. My fault and I got punished for it. Credit to Marcel, he was as game as they come. I know the scorecards were a bit wide but it was a good fight.

“It was a good shot, I felt it and buzzed me a little bit,” Harris said of the fourth-round left hook. “But I and worked through it, composed myself and done all right.”

Butler said: “I’ve had eight good rounds there and we’ll see what happens now. I’m number three in the IBF rankings, and I made championship weight so that could push me up to the number 2 spot which is vacant. I want the big fights. I might be 31 now but I still feel 24 or 25. I’m setting records in the gym and I’m looking forward to the future.”