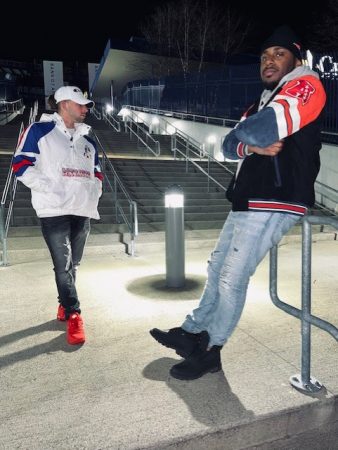 Cappiello and fellow Brockton native Randall “Randy Lo” Coulanges wrote and performed “Patriot,” and Brandon mixed and produced it. This is the third and likely the final anthem for the Brockton duo. Six years ago, their original music video, “Champion,” went viral and their follow-up was a successful Boston Red Sox anthem, entitled “Never Back Down.”

An associate known as BA originally asked “Brandon Capp,” a singer, and rapper “Randy Lo” if they would do a Patriots music video. He was well known on the Boston music scene having been involved with New Kids On The Block and New Edition.

“I was skeptical at first because it’s so difficult to please everyone,” Brandon said. “We did it in less than a week and I produced it in my bedroom. All of a sudden, things were crazy, it went viral overnight. We’ve had more than 3 million collective views across all media platforms. It took on a life of its own. It was playing everywhere, and we were guests on a lot of television and radio shows. It still gets 200,000 views a year.

“Our first anthem was an anomaly. We did it all without any real help in such a short time. But we are real artists who have both been doing music for years. It resonated in every demographic, even playing on radio, something that never happens for a sports anthem that is team based. It was more about recognition for both of us because people loved it and shared on social media. It was an incredible ride that really hasn’t ended.

The third of their anthem trilogy promises to be equally addictive as its original, if not more popular, largely because of several key reasons

“The sky is the limit for this song,” Cappiello concluded. “The first one was special, but this time we wanted to take the special formula of what worked and give a fresh and new take on a great concept. Hundreds of people had asked us to do another one for years.”

“And nobody collaborates better than us. We’re great friends who’ve known each other since the seventh grade. We want what’s best for both of us.

The ideal situation for “Brandon Capp” and “Randy Lo” would be performing live before or during halftime at the 2022 New England Patriots’ season opener, or, better yet, performing at a Pats’ pep rally if they make another playoff run this season

Brandon Cappiello knows how to deliver a knockout….it’s in his blood.