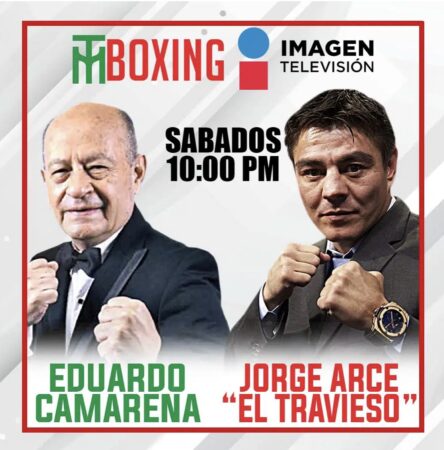 The Imagen network together with TM Boxing announce the return of professional boxing to terrestrial television in Mexico. The series launches on Saturday, January 14th, 2023, and will run the following 50 Saturdays at 8pm PST from different cities in Mexico. In charge of the live play-by-play of the series “The New Image of Boxing” will be veteran analyst Eduardo Camarena while the expert commentator will be seven-time world champion in five categories Jorge “Travieso” Arce.

Founded in 2007 as Cadena Tres, the network launched as Imagen Television in 2016 when the network went national in Mexico, the first to do so in over 20 years. In 90% of Mexico on channel 3.1, Imagen Television draws more than 4.5 million viewers daily. With content not only on their terrestrial network but also on their digital application and social media, Imagen Television not only broadcasts relevant news shows but also original productions and now “The New Image of Boxing” presented by TM Boxing.

“We are very happy to have come to this agreement with Imagen Television and we are anxious to begin this project,” Eric Beltran, director of Operations for TM Boxing stated. “Without a doubt this project is a big challenge which we will take on to give the fans a quality product and to develop the next stars of Mexican boxing.”

“Without a doubt this project will make us one of the companies with the most activity in the world with 51 fight cards in 2023,” Ibarra said. “We are sure to present great fights at the national level which will give us the opportunity to see the stars of tomorrow.”

Some of the fight cards will also be seen worldwide, including in the United States, on Pay-Per-View the BXNGtv.com platform.