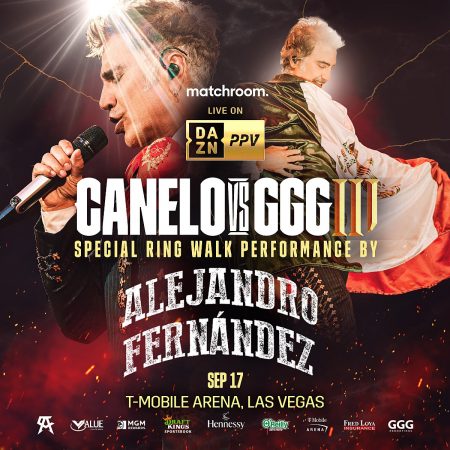 Matchroom and DAZN today announced that international recording artist, three-time Latin Grammy winner and one of Mexico’s biggest superstars Alejandro Fernández will accompany Canelo Alvarez to the ring as he heads into his final fight in the Canelo Alvarez v Gennadiy “GGG” Golovkin Trilogy on Saturday, September 17 at the T-Mobile Arena in Las Vegas.

Alejandro Fernández is the most successful Mexican performer in the history of Las Vegas. His shows in celebration of Mexican Independence Day (Sept 16) have spanned two decades and hundreds of thousands of fans. This year, Alejandro performed to a sold-out crowd on Thursday, September 15 at the MGM Grand Arena and will again this Saturday, September 17, following his historic ring walk. Tickets available here.

“This weekend is about coming together to celebrate Mexico, our culture, our music, and our sporting icons. For over 20 years, we have transformed Las Vegas into one massive celebration of Mexican Independence. It’s an honor to accompany my friend Canelo as he makes history tomorrow night. Que Viva Mexico!” – Alejandro Fernández

Canelo Alvarez vs. Gennadiy “GGG” Golovkin will be broadcast live on DAZN PPV in the U.S., Canada, UK, Ireland, Australia, and New Zealand as well as around the world on DAZN (excluding Mexico, Latin America, and Kazakhstan)​ and is in partnership with Matchroom, Canelo Promotions and GGG Promotions.