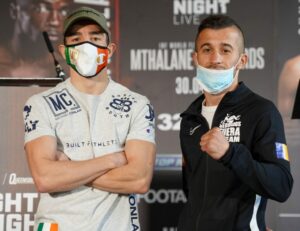 Michael Conlan isn’t fazed by Ionut Baluta’s recent good run of form – insisting that he will win here and then become world champion later this year.

Conlan (14-0, 8 KOs) faces Baluta (14-2, 3 KOs) in London on Friday, on the undercard of the IBF flyweight title fight between Moruti Mthalane and Sunny Edwards.

Baluta heads into the fight on the back of two straight wins over TJ Doheny and David Oliver Joyce, but Conlan is promising a top class performance, as he prepares to compete at super-bantamweight for the first time.

Conlan said: “Baluta has pulled off some good wins lately. This is a dangerous fight as he’s beat two Irish guys in a row and his confidence is sky high, but I’ll put a great performance in.

“This is where you’ll see the best from me and a win here cements my mandatory position with the WBO. I’ll hopefully get that belt this year and I’m very confident of it happening, but I’ve got to beat Baluta first.

“We’ve talked about moving down in weight for a long time, and I’m making 122lbs very comfortably which is nice to see.”

Elsewhere on Friday’s event, along with the world title showdown between Mthalane and Edwards, Troy Williamson and Kieron Smith clash in a super-welterweight bout.

Jonas: Taylor Has Been Unfinished Business Since 2012 On This Day: Alexis Arguello Defended Title Against Rolando Navarrete