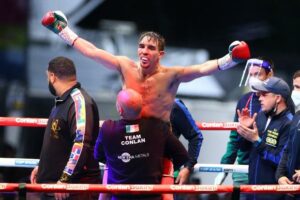 Conlan came into the ring determined to get the belt and his dominance was evident from the very first moment. The London 2012 Olympic bronze medalist worked the body well, was aggressive and managed to take the lead against the former world champion Doheny, known for his overwhelming style.

In the fifth round, Conlan landed a combination to the body that forced his opponent to put his knee on the ground for the only knockdown of the fight. The new champion changed his guard on several occasions to confuse Doheny and in the end had a better fight plan that helped him get the win.

McGregor overcame adversity in the fight, getting up from a knockdown in round two, before firing in a big body shot that sent Legrand to the canvas in the forth round, with the Frenchman unable to get back to his feet, securing McGregor the win.

Tyrone McKenna (22-2-1, 6 KOs) won the vacant WBO Intercontinental super-lightweight title, after coming out on top in a war against dangerous Jose Felix (39-5-1, 30 KOs).

It was non-stop action throughout all 10 rounds, with Felix going down in round one, and McKenna then going down in round three. It was McKenna who dominated large portions of the fight, and the judges scored it 99-91, 97-92, 97-91 to come out on top.

McCrory dropped Gorokhov in the fourth round, appearing to break the Russian’s nose in the process, and after another round of punishment, the referee waved off the bout in round five to hand McCrory the biggest win of his professional career.

Sean McComb (12-1, 5 KOs) returned to winning ways with a dominant points win over former world title challenger Vicente Martin Rodriguez, with the referee scoring it 80-72 in his favour.

On the undercard, there was a first round stoppage win for Fearghus Quinn over Fernando Heredia, while James McGivern and Callum Bradley picked up one-sided points wins over Ed Harrison and Stefan Nicolae respectively.