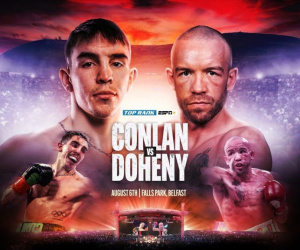 Irish boxers Michael Conlan and T.J. Dohenny will fight for the World Boxing Association (WBA) Interim Featherweight title. The Championships Committee of the pioneer organization approved the fight for the belt that will take place next Friday, August 6th at the Falls Park, in Belfast, Northern Ireland.

Conlan and Dohenny will star in a beautiful fight for Irish boxing. Conlan, 29, is a rising fighter who was a bronze medalist at the 2012 London Olympics and is now looking for a world crown.

He has been continental champion of several organizations and has fought different complicated battles that have helped him get this opportunity.

He will fight against Dohenny, whose reality is a little different. The southpaw fighter has already been IBF World Champion at Super Bantamweight and lost that title in April 2019 during his unification fight with then WBA Super Champion Daniel Roman.

At 34 years old he knows he must take advantage of this chance and although he appears to come in at a disadvantage, his experience is going to be weighty for the showdown.