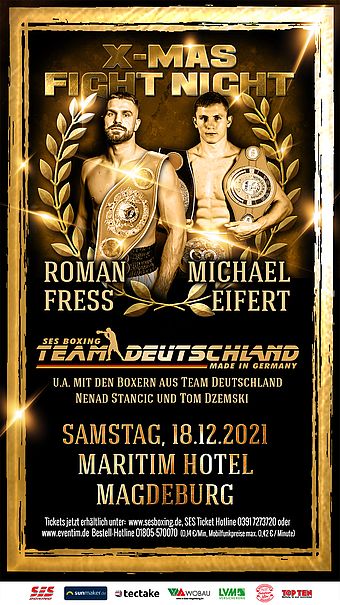 “Team Germany captain” Roman Fress, the WBO Inter-Conti cruiserweight champion, is back in the ring!

WBO Youth Championship in the lightweight

In addition, the Rostock heavyweight Felix Langberg will get into the ring for his sixth professional fight in Magdeburg

Shortly before Christmas, SES Boxing wants to set an optimistic signal for the future of German boxing with the “X-MAS FIGHT NIGHT” on December 18 in the Maritim Hotel Magdeburg , as well as the success story of “Team Germany ”, a SES project Boxing, keep writing.

In “Team Germany” , with its captain Roman Fress and three-time junior world champion Michael Eifert at the top,young SES boxing professionals will present themselves again this year. The Hamburg lightweight Nenad Stancic will now also reach for the WBO Junior World Championship belt. Other youngsters from “Team Germany ” at this event are local heroes from Saxony-Anhalt, Tom Dzemski and Julian Vogel , plus the newcomers Max Suske and Joscha Blin .

Michael Eifert (8-1-0 (2)) , who was born in Bautzen, is now attacking the German championship belt in the light heavyweight division . After the 23-year-old Michael Eifert has “cleared” everything that can be reached in the junior area, this step is logical in his 10th professional fight. In the fight for the biggest national title, he meets the undefeated Niels Schmidt from Wismar. This is clearly more experienced in 20 professional fights with 14 knockout victories and at the “mature” age of 32 years and thus the right test and special task for Michael Eifert in the fight for this vacant German championship.

He is already a WBC Youth Inter-Continental Champion and now wants to fulfill his dream of the Junior World Championship with the upcoming fight for the vacant WBO Junior World Championship lightweight title . The “Hamburg boy” Nenad Stancic has just this big career step ahead of him in his 10th professional fight in a duel with the Latvian Marcis Grundulis (10-1-0 (2)). If he were successful, he would be another junior world champion in “Team Germany”.

More information about the fight of Roman Fress and the other pairings, also with the new “Team Germany boxers”, will be announced separately in the next few days!

Attention: This SES box gala is organized under the current conditions of the SARS-CoV-2 containment regulation for Saxony-Anhalt with the requirements of the “2G-Plus access model”.

Only those who have been vaccinated and those who have recovered have access to the event. They must also submit a current negative certified test. Those who cannot undergo this test at other test facilities can also do this on site. More information will follow!

The MDR will broadcast this event with its program “SPORT im Osten – boxes live” from 10.45 pm .

Admission tickets for the SES Box Gala on December 18, 2021 in the Maritim Hotel Magdeburg are available under the conditions of the “2G Plus access model” at www.eventim.de and from the SES ticket hotline 0391/7273720.