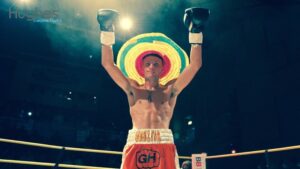 Michael Gomez Jr says he is levels above Kane Salvin as he prepares to do battle for the Sheffield man’s Central Area Super Featherweight Title, live on Fightzone. The pair will clash on a cracking night of boxing at Sheffield’s Ponds Forge Arena on August 27, with Gomez Jr desperate to get in the ring for his first title shot after the bout was scuppered earlier in the year to allow Salvin to recover from an illness.

Champion Salvin, 6-0, won the title with a contentious victory over fellow ‘Steel City’ fighter Sufi Ahmed in December 2020. In a fan-friendly battle, Salvin and Ahmed went toe-toe for 10 rounds in what many thought was a ‘fight of the night’ encounter, with ‘HurriKane’ coming out on top 97-94.

Moston’s Gomez Jr will take the greater experience into the contest, having turned over in 2014 and losing just once in 14 fights during that time. The son of exciting former British champion Michael Gomez; the 26-year-old has been hailed by his manager Kevin Maree for finally dedicating himself to training and looked in good form in a June warm up fight against battle-hardened Nicaraguan, Cristian Narvaez.

Also on the card is popular heavyweight Dave ‘White Rhino’ Allen. The former Commonwealth Title challenger gets a six rounder as he looks to ease himself back into the fight game after a last outing in August 2020 when he stopped Dorian Darch in three rounds.

“I’ve been scheduled to fight for this title about four times now, so the excitement has gone – I just want to fight’ said Gomez Jr, who is trained by Marvin Greaves.  “I also want to give a big ‘shout out’ to Kev Maree, who’s kept grafting away to get this opportunity over the line.

“I’ve seen about two rounds of Kane’s fight [against Sufi Ahmed]. I don’t know too much about him. Me and him are only fighting because I’ve been inactive. Realistically, this shouldn’t be a competitive fight. Ability-wise, I’m levels above him. The only reason we’re meeting at this stage of his career is because my career’s hasn’t gone how it should’ve, and that’s down to myself.

“I’m more mature now. I turned pro when I was 19 or 20 and I wasn’t just a normal kid who turned professional. There were big expectations every fight, it wasn’t easy following someone who was very successful in the game. It’s just taken a long time to get used to it.

“If I don’t beat Kane then I’ll ask myself serious questions because the level I believe I’m good enough to be at is levels above him. Time will tell.”