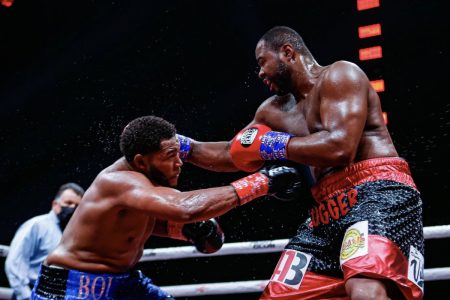 On Thursday night, Triller Fight Club returned to New York City with the fourth installment of its highly successful TrillerVerz series, ‘Night of Heavyweights’, as the legendary Hammerstein Ballroom in Mid-Town Manhattan played host to the five-bout evening of world class professional boxing. Following the live boxing event, the broadcast moved to the world-famous Hollywood Palladium in Los Angeles, CA for an iconic VERZUZ battle between Bone Thugs-N-Harmony and Three 6 Mafia. The replay of the extraordinary evening can be viewed on FITE.

In the main event at the Hammerstein Ballroom, World Ranked Heavyweight Michael ‘The Bounty’ Hunter II, (20-1-2, 14 KOs), of Las Vegas, NV and crafty southpaw Jerry ‘Slugger’ Forrest, (26-4-2, 20 KOs), of Newport News, VA fought to a ten-round split-decision draw in an outstanding clash of heavyweight titans. Scores were 96-94 Hunter, 96-94 Forrest and 95-95. The fight was a rematch from their battle in June 2014 won by Hunter.

From the opening bell both heavyweights threw every punch with bad intentions as each was rocked in the early rounds by hellacious hooks to the head. With the huge crowd at the Hammerstein Ballroom on their feet throughout, Forrest seemingly took control of the action in the fifth and sixth rounds only for Hunter to dominate the seventh with huge head shots to end the round.

Fighting the last three rounds knowing the fight hung in the balance both Hunter and Forrest emptied their proverbial gas-tanks with each landing massive bombs that would have ended many heavyweight fights. The crowd in attendance roared with their appreciation at the end of the ten rounds.

In the co-featured ten-rounder between two UNDEFEATED heavyweight contenders, ‘Gentleman’ George Arias, (17-0, 7 KO’s), of Bronx, NY out landed and outworked Cassius C.O.G. Chaney, (21-1, 14 KOs), of New London, CT. Scores at the end of the exciting contest were 99-91 and 97-93 for Arias taking a split decision with the third judge awarding his card to Chaney, 96-94.

Using the first two rounds to navigate the height advantage of Chaney, Arias started peppering the former college basketball player at will in the third round and continued through round six. Chaney came out firing bombs in the seventh and while several did damage, Arias was able to weather the storm and put the fight back on track towards a wide victory on two of the judges’ cards.

In a special attraction ten rounder between UNDEFEATED heavyweight contenders, heavy-handed southpaw Mike Balogun, (18-0, 14 KOs), of Upper Marlboro, MD wasted no time against ‘Son of a Legend’ Trey Lippe-Morrison, (18-1, 17 KOs), of Tulsa, OK. Drilling Lippe-Morrison to the canvas with a massive left hand midway through the first round, the former NFL linebacker would connect against the standing but badly hurt Lippe-Morrison with a barrage of punches as referee Eddie Claudio called a halt to the contest at the 2:41 mark of the opener. Lippe-Morrison is the son of former heavyweight champion of the world, Tommy Morrison.

In a scheduled six-round heavyweight clash, Joe ‘Louis’ Jones, (13-4, 10 KOs), of Jersey City, NJ knocked out ‘Hurricane’ Junior Wright, (18-4-1, 15 KOs), of Evanston, IL in the second round. After a feeling out portion for most of the first round, Jones would drop Wright with a stunning right hand in the final seconds of the stanza. Sending Wright to the canvas again to start the second round with a left hook, overhand right combination, Jones would be awarded the knockout victory as the fight was waived off just 13 seconds into the second round.

Rounding out the exciting card in an action-packed light heavyweight six round clash, Khainell Wheeler, (6-1, 5 KOs), of Bethlehem, PA picked up his first decision victory defeating the heralded and previously UNDEFEATED Frederic Julan, (12-1, 10 KOs) of Brooklyn, NY by unanimous scores of 59-55, 59-55 and 58-56.

TrillerVerz, successfully bringing together first-class professional boxing with iconic VERZUZ battles, is produced by the award-winning Nigel Lythgoe, the Triller Fight Club visionary in addition to the producer and creative force behind American Idol and So You Think You Can Dance.

Triller Fight Club is celebrating the one-year anniversary of its extraordinary launch on November 28, 2020 which shook up the sports and entertainment world as Boxing Legends Mike Tyson and Roy Jones battled in Los Angeles, CA on a Pay-Per-View broadcast which garnered 1,600,000 PPV buys.