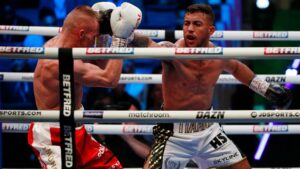 Michael McKinson avoided a potential banana skin in Przemyslaw Runowski as he outpointed the brave Pole after ten rounds of skilful boxing from the Portsmouth man.

‘The Problem’, now 21-0 (2 KOs), dominated on the cards to maintain his unbeaten record and retain his WBO Global Welterweight Title.

“I’m happy, that was easier than I thought it would be, I didn’t really get out of first gear,” McKinson told Matchroom. “I visibly hurt him a few times, but I boxed to instructions and got the win. To be fair I didn’t think he won a round against me, but he was a tough guy. Him and his team were very confident beforehand, I liked the energy they brought all week, but I just had to show I was a level above, and I was a few levels above – I’m happy.

“They keep giving me harder opposition, they keep telling me it’s a step up and I’m making it look easier and easier. What people forget is I’m learning every day on the job as well; I’m developing and who knows where I can be in a year or twos time. I’m in a position where a lot of boxers dream of being in, all I can do it stay focused, keep learning and keep working my way to the top.

“2021 and my career has just started, 21-0 and making it look easy. I really want to keep stepping up, keep challenging myself, keep having more and more tests. I’m still learning but I’m learning quick and finding it easy now. I want opponents that will make me step through the gears, a few times I hurt him there like I can punch, I don’t need to, I boxed to instructions. I didn’t really get out of first gear.

“I believe I’m the best 147 pounder in the country. I like Conor, I get on well with him, but if he can’t get them two guys the Brooks or the Khans, I’m always here. I’ll fight whoever they give me, I’ve never turned down a fight and that’s a fact – I don’t plan on turning down fights. I really do believe in myself, and I believe in my development as well. I’m going to be going to the top I promise you.

“I’m really happy for Liam Taylor because he never really gets a fair ranking and he’s a good fighter so I’m happy he’s got that opportunity. I’m not far behind, I’d like the winner, but I’ll fight whoever makes sense and whoever my management team want to get me next – the answer is always yes. That guy there I just beat took Josh Taylor to points on short notice, he had a full camp against me, his team were so confident talking to me in the hotel.

“Like I said, I make their confidence fade round by round, they don’t call me ‘The Problem’ for no reason. I will carry on being a problem as I step through the levels as the opposition gets better, trust me.

“Josh Kelly has got a lot of ability, he’s a skilful fighter, I like Josh – even after the Avanesyan defeat I still think he’s a top fighter. Florian Marku talks a lot doesn’t he, he didn’t know who I was a few months ago on social media on an interview, he said he didn’t know who I was. At least they’re talking about me now, let him prove himself because I don’t think he’s proved himself at a decent level yet, not saying he’s not a good fighter, but he does need to prove himself as a fighter to be respected. Good luck to all of them, I wish nothing but the best for all my rivals, you know I’m here and I’ll fight anybody.

“Even when we go back to proper arenas and stuff, wait till we get hundreds and hundreds of Portsmouth fans loud and proud. I’ve got great support and it’s always growing; I know there’s a lot of people that didn’t come today but when they’re allowed everyone will see the Portsmouth fans.”