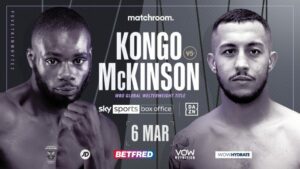 Undefeated Michael McKinson will take on Chris Kongo for the WBO Global welterweight title on the Alexander Povetkin vs. Dillian Whyte 2 bill on March 6.

The event will be broadcast live on Sky Sports Box Office in the UK, and on DAZN in all other markets excluding the UK and Ireland.

It sees McKinson (19-0, 2 KOs) get the chance to test his skills against fellow undefeated fighter Kongo (12-0, 7 KOs), and both men are extremely excited.

McKinson said: “I’m very pleased with this Chris Kongo fight. It’s a fight I have called for and I’m over the moon to get a fight that I want. I’ve wanted a big fight for a long time. I deserve one and I’m buzzing.

“It’s a massive platform and one that I need in my career. I believe I was born to be on the big stage and I can’t wait to show that on March 6. Chris Kongo is a dangerous fighter and a talented fighter, but there is no fighter like Michael McKinson. You can throw me in with anybody and I’d come out victorious.

“I’ve told Chris before many times that all they needed to do was make the call and the answer would be yes. Winning a fight like this can change my life and change my daughter’s life, it can catapult me to even bigger things. That’s why I’m in this sport, to do big things for my city of Portsmouth and big things for my daughter and make people proud, and that’s what I’ll do on March 6.”

Kongo said: “I’m very excited, this is a fight that I’ve wanted for a long time. He was saying that he was far ahead of me, but now I’ve got the belt, the tables have turned.

“It’s going to be an explosive win for me. This is what we train for, this is what we work for. I want the big risk fights. If you don’t take risks in life, you won’t get anywhere, so it’s all about taking another risk in my career.”

Elsewhere on the March 6 bill, JJ Metcalf goes up against Ted Cheeseman for the vacant British super-welterweight title.