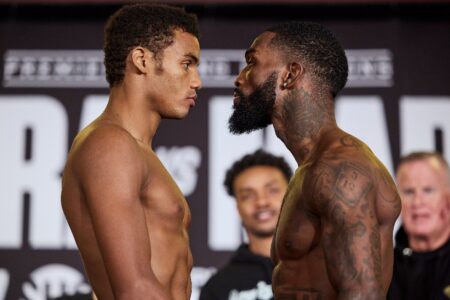 Rivera vs. Martin will see rising undefeated lightweight contenders Michel “La Zarza Ali” Rivera and Frank “The Ghost” Martin clash in an intriguing 12-round WBA Lightweight Title Eliminator as they headline live on SHOWTIME Saturday, December 17 in a Premier Boxing Champions event at The Chelsea inside The Cosmopolitan of Las Vegas.

The SHOWTIME CHAMPIONSHIP BOXING® telecast begins at 10 p.m. ET/7 p.m. PT and will also see former world champion José Uzcátegui return to action against unbeaten former amateur standout Vladimir Shishkin in a 12-round IBF Title Eliminator. Plus, bantamweight contenders face off as Vincent Astrolabio and Nikolai Potapov battle in a 12-round IBF Title Eliminator that kicks off the telecast.

Tickets for the event, which is promoted by Man Down Promotions and TGB Promotions, are on sale now and can be purchased through Ticketmaster.com.