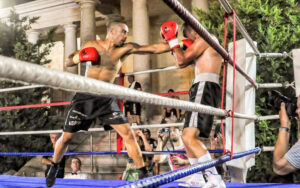 Former WBC World Champion Arturo Gatti was certainly a fans’ favourite. His all action, never-say-die style made him hugely popular with boxing aficionado’s and casual followers alike – his online highlight videos are among the most watched of any boxer. Now, fans of Gatti have a new figure they are watching closely – Middleweight Christian ‘Coqqos’ Schembri.

Due to their similar fighting style, Schembri was recently dubbed ‘the new Arturo Gatti’, and this compliment has not been lost on him: “Gatti is a legend and my hero; I always watch his fights before I step in the ring, no better way to get me fired up. He’s an inspiration for me to never give up in boxing or in life”, said Schembri who is back in action on 6th March.

Gatti’s trilogy of fights against Mickey Ward are legendary, and their third encounter was even named ‘Fight of the Year’ by Ring Magazine. Interestingly, Schembri has even had a trilogy of his own; that was against former Commonwealth Champion Scott Dixon, which ‘The new Gatti’ leads 2:1 in his favour. All three fights with Dixon were toe-to-toe slugfests which had the fans on their feet!

Speaking of his respect for Gatti, Schembri commented: “He was in a war practically every time he was in the ring and you could never count him out. Look at his fights against Ward, Patterson, and Ruelas. Both eyes closed and he keeps throwing hell for leather until he turns the fight his way.” Schembri has also had to ‘turn the fight his way’ too. When fighting for an Intercontinental title, he was dropped heavily in the second round, before rallying and forcing his opponent to quit at the end of the sixth.

In a final tribute to his hero, Schembri said: “I love Gatti and hope to win a WBC title like he did. He was a true blood and guts warrior who left his heart and soul in the ring every single time. He was taken too soon…”

If you are keen to watch the New Arturo Gatti’s all action style, then tune into Christian Schembri’s next fight which is available on Fite.TV on March 6th. This time he faces exciting brawler Ignazio Crivello of Italy. Fireworks are guaranteed when these two meet in the centre of the ring. Not to be missed!