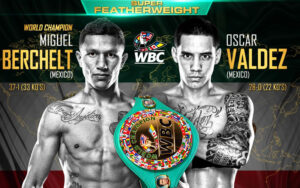 The long-awaited fight between the super featherweight champion of the World Boxing Council, Miguel “Alacrán” Berchelt and the former undefeated world champion, Oscar Valdez, will take place on February 20 at the MGM Grand Bubble in Las Vegas, Nevada.

Both warriors sent their 14-day pre-weighing in, showing their great commitment and exceptional professionalism. Berchelt weighed 136 pounds, while Valdez was 136.4.

One of the main priorities of the WBC is to protect the health of the fighters with the pre-weigh-ins and pre-fight health requirements.

Berchelt, 28, with a record of 37-1 with 33 knockouts, has made six defenses of the title that he won against another Mexican, Francisco Vargas, in January 2017, and is undoubtedly one of the most accomplished and dedicated fighters of today.