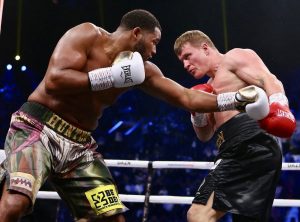 Hunter fought Povetkin to a (split) drawer and is son of the late Mike Hunter (R.I.P), the heavyweight of the 80’s and 90’s.

“Povetkin will be there to get him. The fight will be at a decent pace. I think it’s going to be an interesting fight to see, because the pace is going to be very similar, so I’m probably going to lean towards Povetkin.

“I think it’s knockout win for Povetkin very possible. The percentage is high and that’s why I think this is a good fight, because people want to see explosions and I think they’re going to get it here, even if it’s for two minutes, or it might be for the whole fight. We’re looking for big punches thrown and I think that’s what the fans are excited to see.

“He has a veteran experience that goes with him in the ring, definitely.

“Very subtle things that he knows what to do. He has a heart of a lion, that’s for sure. Just that alone, a very difficult situation to deal with. I think I exposed a lot of stuff. I exposed that he can be easily knocked down in any round. I also exposed that he’s not going to lay down. If you don’t knock him out, then he’s not going to be knocked out. He’s not the one to worry about what should happen in that situation.”