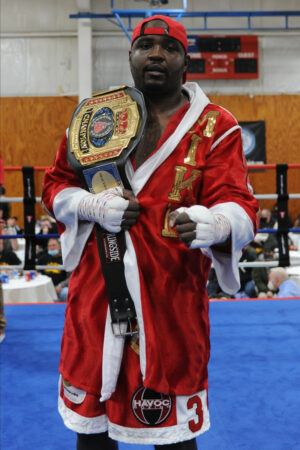 The 33-year-old Marshall (6-1-1, 4 KOs), fighting out of Danbury, Connecticut, will take on undefeated Ukrainian prospect Viktor Vykhrryst (aka Faust) in an 8-round bout.

“This fight means everything to me,” Marshall said. “I’ve worked for this my whole life. To have this opportunity to showcase what I can do as a fighter is incredible. I signed with Chris (Granite State Promotions president Chris Traietti) after the (Steve) Vukosa fight (10-round split draw, this past June) and he’s really come through.

“I’m not the type of person to shy away from an opportunity like this that he gave me. I saw that he had gotten other fighters in big fights. Promoters like Chris don’t get the credit that they deserve. Fighters need good promoters and management teams like I have. At the end of the day, we need fights and to get paid.”

“Fighters like Mike represent how I want to build Granite Chin,” Traietti commented. “I want all my fighters (and most do) to have what I call the 3A mentality….anyone, anytime, anywhere…just pay us accordingly. Most promoters want to keep their guys in this tiny bubble making scraps. That’s boring, short sighted and creates a low ceiling. I want to sharpen my fighters up at home but then we go on the road to see what we got and make damn good money in the process.

“Mike didn’t even hesitate at this fight. He saw the opportunity and did what real fighters do, step up to the plate and get ready to go to bat. I appreciate the credit he throws my way, but he did the heavy lifting, he took the fights that me and his management team told him. This wasn’t an easy road for him. He had to take on some tough fighters and now he’s getting his just reward. In a few weeks it won’t just be the New England fight crowd that knows about ‘Fly’ Mike.”

Vykhryst, 29, will be making his United States debut as a professional against Marshall. A decorated amateur boxer, he won gold medals at the 2017 European Championships and 2019 European Games. The 6’ 5”, 235-pound Vykhryst, who has fought in Germany the past two years, is coming off victories against unbeaten opponents, 11-0 Jacek Krzysztof Piatek (KO1) and Wilmer Vasquez (11-0-2).

“He’s a big right-hander,” Marshall noted. “He has had experience fighting in the WSB (World Series of Boxing – 3-1), too. A fight is a fight and I’m not saying anything before our fight. I’ll show what I have during the fight.”

What could an impressive victory against Vykhryst, especially on the Fury-Wilder III platform, do for Marshall and his career?

Marshall responded: “Wow! More opportunities will open up with a win against this guy on this card. I think the floodgates will open. I’m so excited to be living out my dream. Most people don’t know I was an amateur for 10 years and we didn’t get paid. I’ve sacrificed a lot to get here. Somebody once told me: ‘Life isn’t about what you want, it’s about what you are. I can’t run, I’m answering the call.”