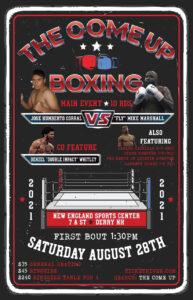 “The Come Up’ is the name of the professional card held during the afternoon session of a day-night doubleheader, separate admissions. The championship final of the inaugural “Granite Chin Invitational” will headline the evening portion of Pro-Am doubleheader.

Marshall (5-1-1, 4 KOs), fighting out of Danbury (CT), who was supposed to fight on the Fury-Wilder III card July 24 in Las Vegas, which was postponed until October 9th due to members of Fury’s camp contracting COVID-19.

Marshall will face his Mexican opponent, Jose “Olimpico” Corral (20-27, 12 KOs), in the 10-round, non-title fight main event. Marshall is coming off a hard fought, 10-round draw with 13-1-1 Steve Vukosa, proving “Fly” is more than capable of fighting a proven veteran in a 10-rounder. Marshall is 2-0-1 in his last three fights, each at the New England Sports Center.

One of the brightest prospects in New England, Holyoke (MA) welterweight Denzel “Double Impact” Whitley (5-0, 4 KOs), is matched against 57-fight veteran Dewayne Wisdom in the 6-round co-featured event.  Whitley is a member of Western Massachusetts’ first boxing family, cornered by highly respected former boxers Derrick and Darren, respectively, Denzel’s father and uncle. Denzel carries on the “Double Impact” nickname his father and uncle used during their pro careers.

“It will be nice to get one final show in Derry to close out a very successful 2021 at the New England Sports Center,” promoter Chris Traietti said. “On August 28th, we are going to highlight some of the brightest amateurs in the area and during the day, we are showcasing some of the best up and coming pros in New England. A guy like Mike Marshall is on the cusp of landing a huge fight on the national stage. Then there are fighters like Denzel who have been on the fast track to making a name for himself, and 2022 will be a breakout year for him. On top of that, fans will get to see Carlos Castillo, both Sumpter brothers and much more. It will be a fitting way to complete 2021 in Derry, but we will no doubt be back at the Sports Center in the spring of 2022.”

Five weight classes in the championship finals of the “Granite Chin Invitational,” sanctioned by USA Boxing, are scheduled at night featuring some of future New England future champions

Welterweight Arika Skkog (Nonantum Boxing Club) is the most celebrated amateur in the finals having captured a gold medal at last year’s USA Boxing Elite National Championships, as well as being a 2-time New England Golden Gloves Champion. She faces Emily Jones (Everybody Fights Rock), of Woburn (MA), in the championship match.