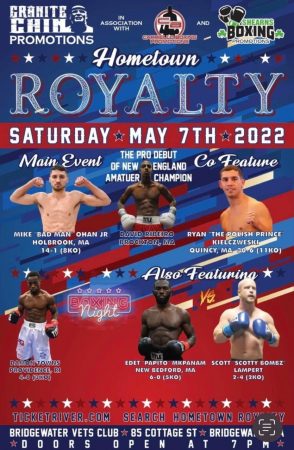 Mike “Bad Man” Ohan Jr. and Ryan “The Polish Prince” Kielczweski are fighting May 7th on the “Hometown Royalty” for much different potentially career-changing reasons.

“Hometown Royalty”, presented by Granite Chin in association with Cappiello Boxing Promotions and Shearns Boxing Promotions, will be held at Bridgewater Veterans Club in Bridgewater, Massachusetts (85 Cottage St.), marking the first professional boxing event ever held in that town.

Ohan Jr. (14-1, 8 KOs), of Holbrook, MA, is a former New England welterweight champion who is fighting at junior welterweight for the second fight in a row. Ohan fights Jose “El Chino” Aubel (8-9, 7 KOs), of Argentina, in the 8-round main event.

Ohan is positioning himself for a significant fight, ideally, a regional title and highest purse of his career. In short, he’s trying to get where Kielczweski has been.

“I have an advantage of being a bigger fighter at a smaller weight,” Ohan explained why he’s committed to dropping down one weight class. “My last fight was also at 140. I’m ready to step up, it’s only a matter of time. I’ll fight whoever is lined up but, I believe, I’ll be in a big fight by the end of this year, or in 2023.

“I’ll be fighting 10-15  minutes away from where I live. It’s almost sold out and I’ll have a lot of family, friends, and fans there supporting me. My opponent comes in shape, ready to go. My opponent is a southpaw. I’ve been getting ready to fight a southpaw and today a lot of fighters switch back and forth. It’s no big deal. It’s going to be fun.”

Kielczweski (30-6, 11 KOs), who lives 30-minutes away from the venue in Quincy (MA), is still fighting for a completely different  reason. He’s become a gatekeeper, or sorts, and now he wants one more good shot.

The now 32-year-old Kielczweski wants to return to the lofty status he once had, to get into a lucrative payday. A 2008 National Golden Gloves silver medalist, as well as a 2-time New England Golden Gloves Champion, Ryan K is matched against Argentinian lightweight Mario Lozano (18-5-1, 9 KOs), in the 8-round co-featured event.

“I’m fighting May 7th to get back in the win column to position myself for one last big shot,” Kielczweski said. “I have some gas left in the tank. Why not empty it? It’s tough, though. My last two fights were in Las Vegas, the last in August on the Pacquiao- Ugas undercard. I’ve passed this point already. I may say this is my last year fighting, so I’m going to have fun while it lasts.”

“Ryan and Mike are two of the best guys you will ever meet in boxing,” Granite Chin president Chris Traietti noted. “Both are hardworking, humble guys who aren’t afraid to put in the work and make the most of situations. Ryan has had a tremendous career competing on some of the biggest stages in boxing. He is at the point where he is looking to wrap it up with another shot or two at big paydays and then move on with his life. Mike is now getting to the point where he is going to start to see the stages that Ryan has been on. Mike has grinded his way through the club boxing scene and I’m excited to see him move on to the national stage very soon and get the compensation he has worked for.”

Fighting out of the “City of Champions,” Brockton’s favorite son David Ribeiro will make his much – anticipated pro debut in a 4-round bout versus Joshua Zimmerman (0-8). Ribeiro was a celebrated amateur having won gold medals at the 2020 New England Golden Gloves, 2019 King of the Ring, and the regional Mike Tyson Tournament.