Mike Tyson Now The Odds on Favourite Against Jones Jr 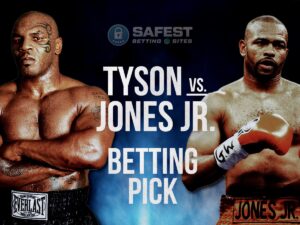 Mike Tyson is now the favourite to prevail when he goes in against fellow senior Roy Jones Jr.

It was reported that up to September 11th, Roy Jones Jr was the overall odds on favourite, just and by a slim margin. But now it appears to have changed with Mike Tyson now the narrow favourite against Jones Jr.

Depending on which betting company you go with, they all seem to vary. OddsShark say overall it has now swung in Iron Mike’s favour. I will confess to not being a gambling man nor do I fully understand the fine details…I keep away from it for good reason.

All seems interesting as the feeling I got, like many others, was astonishment from Tyson’s early footage, the social media videos that went viral captivated many in the process.

In recent interviews, Tyson has given the impression that he is or at least was struggling whilst Jones Jr seems to be in a bit of a rhythm with what has been circulating with his training footage, so what the shift is due to I don’t know for sure.

Granted, with social videos and the like, they only want you to what they want you to see. Maybe the bookies know something we don’t.

Anyway, to me it is fascinating, a guilty pleasure of sorts. Yes, I will be watching for sure. There are plenty that are scoffing at the idea but I’m sure come November 28th, they will be paying out for two senior former elite fighters that will be battering each other with puffy gloves.

Maybe one may pull out. Enter Shannon Briggs…