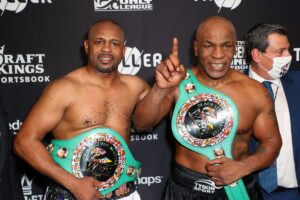 Mike Tyson & Roy Jones Jr. battled to a draw in an eight round exhibition on 28/11/20. In the aftermath, the two over 50’s had the following to say:

“I understand why people say fighting Mike Tyson is a bucket list [item],” said Jones. “When he hits you, your head, your body, it all hurts. For me, I thought I did enough boxing to edge it out.

“Everybody loves Mike; I love Mike too,” noted Jones. “But, it’s something to taking punches from Mike. I’ll go talk to my family and see how they feel about it. If they thought they enjoyed what they saw and want me to come back and do it again, then we’ll do it again.”

“Absolutely,” Tyson said to the possibility of returning under similar circumstances. “I hope (Jones) will be on the card as well. We gotta do this again.”