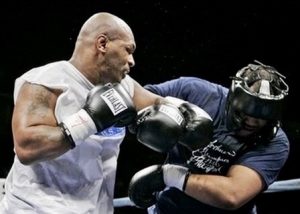 With the recent heavyweight focus on Dillian Whyte losing to Alexander Povetkin and as we await the Daniel Dubois vs Ricardo Snijders massacre tonight, lets take the focus away from the current heavyweight mess (which is slowly gaining some clarity) and onto the exhibition that many are calling a farce.

I for one have warmed to the bout and I am very intrigued with the many questions that will hopefully be answered. To me, it is a guilty pleasure of sorts as I occasionally salivate picturing the two of them in the ring together trading punches (or maybe not). 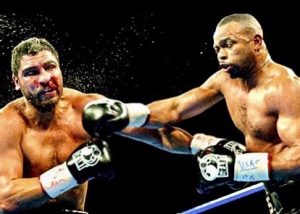 As a boxing connoisseur you may appreciate the heavyweight Jones Jr. fight for sure. Mike Tyson’s last fight, an exhibition bout against Corey Sanders in 2006 and Roy Jones Jr’s only heavyweight fight in 2003, it may give you some idea as to what to expect in the upcoming bout on November 28th and the outcome. Or maybe not.

There are so many questions surrounding this exhibition that can only be deemed more as an event. Yes, Tyson is in far better condition now and it appears his focus is back but he is now 54. And what does Jones Jr. have left (especially with his now extinct chin)? 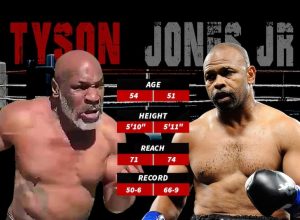 Roy Jones’s only heavyweight match was against John Ruiz who was defending the WBA version of the title in 2003. It was a marvelous display considering the prior weight classes Jones Jr. had already won titles.

All you need to do is click the above links and will direct you to the page on our website where the fights are located.

Oh, and a preview on the Dubois fight tonight…don’t blink.