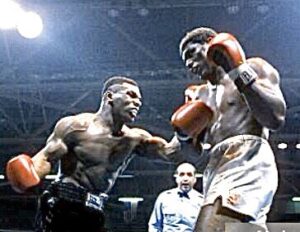 The bout was originally scheduled for March 29th but was delayed as Tyson had an ear infection.

Coming into the bout, Tillis (known as the “fighting cowboy”) was 1-4 in his previous 5 bouts but he came in motivated for this bout, weighing his lightest in two years.

Refereed by Joe Cortez, the fight was scheduled for 10 rounds and was scored by three judges. Al Reid scored it 6-4 rounds to Tyson, Bernie Friedkin 6-4 to Tyson and Tony Moret 8-2 to Tyson. The bout was therefore a unanimous decision for a Tyson points win. 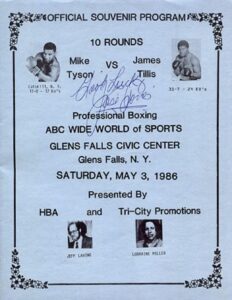 The score was regarded as controversial, with many of the 7,591 in attendance saying that Tillis had won, and vice-versa with Tyson.

They never met again as professional fighters though they did meet in an exhibition bout on November 13th, 1987. The proceeds went to the Holy angels Church and was held at De Pauls Alumni Hall and both wore head gear and 16-once gloves.

The event was presented by HBA and Tri-City Promotions.