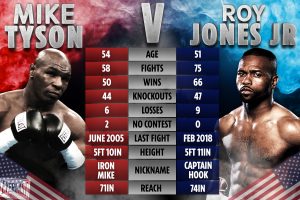 Frustrating news that the Mike Tyson vs Roy Jones September 12th fight has been postponed to November the 28th so that the revenue for the event can be maximized.

This is now confirmed and not just a rumour with the same location and the new date confirmed but yet to be officially announced.

With the fight date now as such free, Saul Canelo Alvarez reportedly has his eye on this date. This would be regarded as ‘short notice’ so look for a lesser opponent for Canelo to remain active.