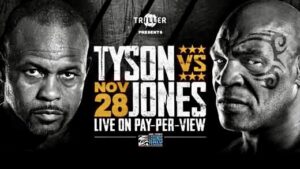 Tyson vs Jones Jr. Battle to a Draw

Bringing back memories of when Tyson fought James “Bonecrusher” Smith, the bout was intriguing though spoiled by the continual holding from Jones Jr. It showed promise of what surprisingly could of been a good fight.

The draw was given to not allow a loser, thought it was a close fight. Jones Jr. tried to “shoe-shine” will clinching with Tyson always threatening throughout. Expect to see more from both of the fighters.

Key thing was the bout went well, no controversy and it was competitive (except from the excessive holding). All go home happy with no damage done. Shame the same can’t be said for Jake Paul vs Nate Robinson!

Fight Notes: Time of the stoppage was 1:35 of the 2nd round for a Paul KO win. Robinson should not of been in the ring as was down three times and out for the count for a while via the last knockdown. He needed medical attention.

Fight Notes: Time of the stoppage was 2:50 of the 7th round for a Ortiz stoppage win.

The Rashad Coulter vs. Hasim Rahman Jr. bout has been cancelled after late substitute Rahman Jr. testing positive for COVID-19. The unbeaten Coulter still weighed in in order to get paid as per his fight contract.