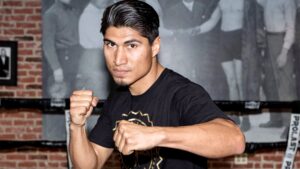 Mikey Garcia is one of the lucky ones that have fought this year when in February he decisioned former champion Jessie Vargas in Texas. As we all are aware, shortly after COVID-19 hit worldwide, KO’ing most boxing bouts.

Garcia (40-1, 30 KO’s) is still after a fifth divisional title, wanting to face WBA welterweight champ Manny Pacquiao (62-7-2, 39 KO’s). Eddie Hearn, who promoted Garcia on his last fight, spoke about Garcia and his plans:

“Mikey Garcia is one of the fortunate ones that has boxed this year, so he’s not busting my phone up too much at the moment. But he wants to fight Manny Pacquiao,” Hearn told DAZN.

“It’s very difficult to make those sort of fights at the moment, unless we get a big site fee from another country. Mikey is basically that guy who wants the monstrous fights, and he’ll be looking to make that happen,” Hearn added.

“For all of these top names, it’s just a case of getting them out just once this year. Letting them get out there, letting them progress their career, letting them get paid, keeping their profile bubbling. And that’s the tough job for us now, coming through Fight Camp: trying to schedule all these major names and world champions without crowds. It’s going to be a tough task over the next couple of months.”