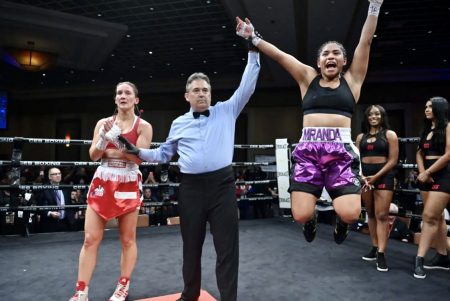 It’s extremely rare for a 20-year-old boxer to defeat a Hall of Fame inductee like Houston lightweight Miranda Reyes (6-1-1, 3 KOs) did this past June 24th against Jaime “Hurricane” Clampitt (23-6-2, 7 KOs), a Class of 2020 International Women’s Boxing Hall of Fame (IWBHOF) inductee.

Clampitt, 46, is a 4-time World Champion who relocated to Rhode Island from Canada, where she was a National Champion, at the beginning of her professional boxing career. Last year, she came out of a 9-year retirement, winning her first two comeback fights prior to fighting Reyes at Bally’s Twin River Casino in Lincoln, Rhode Island.

“I accepted the fight right away when it was offered,” Reyes explained, “but a lot of people kept telling me to get out of the fight. I’m not that type of person, though. I go out of my comfort zone to do new things. People kept saying I was only a B side fighter, but I knew what I was capable of doing. I did go into the fight thinking I may lose because, in my mind, you lose in this sport. I’m not afraid of losing but if I’m going to lose, I’m leaving it all in the ring, learning from the experience.”

Not only did Reyes upset a Hall of Famer, but she did also so in Clampitt’s backyard, taking an impressive 8-round unanimous decision (79-73, 78-74, 78-74). Equally remarkable is that Reyes was coming off a loss to 1-4-1 Jaica Pavilus.

“I’m really proud of myself,” Reyes said. “She’s a Hall of Famer who I really look up to. Someday I hope to be in her position. It think it’s really cool what she’s done in boxing for so long. I fought in her backyard with everybody supporting her. It was like me against all of Rhode Island. I was really confident because of all the hard work I had put in. I was supposed to fight April 30th (that fell through), so I was in camp for 3 months for this fight, pushing myself hard because I was fighting Jaime in my first 8-round fight. I didn’t put in the same effort when I lost to Jaica. I trained 9 to 3 every day for Jaime.”

Reyes is the lone female in the Fighter Locker stable, which is owned and operated by manager Ryan Roach.

“I am extremely proud of Miranda,” Roach commented. “She came up here out of her comfort zone and fought her way to a major win. That’s what makes champions. She is getting uncomfortable. I knew this was the right fight at the right time. She had a great camp with Marlen Esparza. Miranda was a completely different fighter from her last fight. We will enjoy this victory for now and decide what is best for her, but all the boxing doors are open as of now!”

“Ryan has moved me much more than I had been, arranging fights and even paying for some of them,” Reyes noted. “He has really helped my career. What I really like about Ryan is he believes in me. Before the fight, he told me I would beat Jaime.”

Reyes made a loud statement and, hopefully, it’ll start paying off soon in terms of higher profile, more lucrative fights.

“A lot of people have started recognizing me since my last fight,” Reyes concluded. “Before, I think a lot were sleeping on me. I still have a long way to go, but I’m not pushing things. I’m taking it one fight at a time. My goal is to get in the ring against big-time fighters. Again, I’m going to take it one fight at time right now. I don’t pay too much attention to goals, but I want to keep progressing, take my time, fight the best and see what happens.”

Miranda Reyes may have just pulled off the 2022 Upset of the Year in women’s professional boxing!