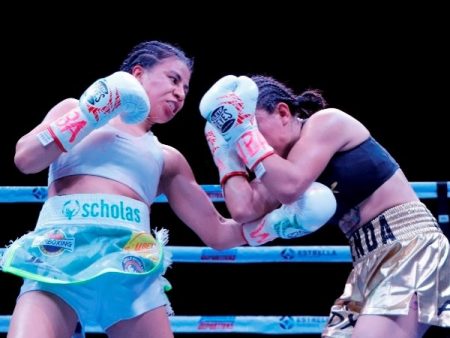 The bombings erupted from the first bell. Martínez came out with everything in front, trying to surprise and overwhelm Alarcón, who showed off her experience to come out with a victory. Martínez focused on the middle part of the body, but Alarcón initially did not receive much punishment.

Martínez disrespected the champion and prescribed the best of her arsenal up and down, but Alarcón began to move around the ring and attacked Martínez from medium and long distance with flips and upper cuts.

Martínez’s hunger for victory left her exposed to counterattacks from Alarcón, who punished Martínez in the middle with a hook to the body, and side steps to make the challenger miss. Alarcón finished Martinez with curved blows to the head, which made Martinez feel very punished after the fifth round.

Sensing that the fight was in her favor, Alarcón and her corner chose to use more throughout the ring, releasing only the necessary blows to do damage without risking and adding points from the judges. The last assault was pure drama, with Alarcón going up in smoke and Balderas overturned with her entire front in search of a knockout. However, both fighters ended up on their feet, and the judges determined Alarcón as the winner.

Gonzalo Javier “Batman” Fuentes from Mexico City defeated Francisco “Chito” Rodríguez from Puebla by unanimous decision, 39-37, 40-36, and 40-36, in a 4-round super lightweight fight.

The Irish Sinéad Cáit Babington could not beat Joana “La Medusa” López from the State of Mexico, who won by technical knockout at 1:43 in the fourth round in a 4-round super lightweight fight.

The remaining Friday fight nights for 2022 include October 28, November 25, and December 16.

Coyle vs. Cash: Coyle completes US training, headed to UK Andy Ruiz not available to fight Tyson Fury in December