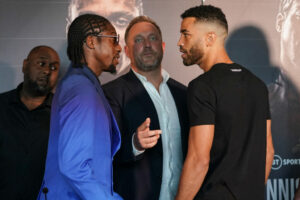 Tempers flared once again as Akeem Ennis-Brown and Sam Maxwell exchanged words at their final press conference ahead of Saturday’s highly-anticipated showdown.

Undefeated fighters collide as Ennis Brown (14-0, 1 KO) defends his British and Commonwealth super-lightweight titles against Maxwell (15-0, 11 KOs) on a Queensberry Promotions show at the Arena Birmingham this weekend, live on BT Sport.

The two men were involved in a feisty press conference earlier this month, and it was more of the same from the duo as they sat in front of the media once again for Thursday’s final press conference ahead of fight night.

Ennis Brown said: “I respect him as a fighter, but I don’t think his record is as good as mine. Since winning the titles I’ve been a lot more wanted, and if I keep going the way I’m going then I’ll get even more of these big fights.

“This challenge excites me, and I’ll be able to show what I’m all about. I have the style to nullify anybody. Maxwell is getting beaten up, that’s  just facts. He should meet me in the middle of the ring and we’ll see what happens.

“The defining thing in his career is going to be losing to me. I’ll punch him up all day long. He’s not on my level and I’ll be retaining my titles.”

Maxwell said: “Everything he brings to the table I’ve seen before. I boxed at a high level in the amateurs, and I’ll show on fight night that I can deal with it.

“I knew what kind of character he is. He’s not under my skin, and I think I’m actually under his. A fight like this brings the best out of me. I like being the underdog, and I feel like Akeem is a weak man.

“He’s got no power and there’s nothing he can do to stop me. I’m going to knock him spark out. He’s a clown, and I’m the WBO European champion, and now I want his titles.”