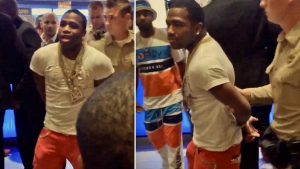 Adrien “The Problem” Broner, the former four-division world champion has been sentenced to seven days in jail (again). This time it was for violating probation.

He was in the Ohio courtroom (Cleveland) on Wednesday according to Cleveland.com. Judge Sherrie Miday told Broner that she hoped the seven day sentence would be a “wake-up call.”

Known as “the problem”, the nickname was originally intended as a problem to other fighters, not a problematic life in and out of jail. Somehow I think the judges hope of a “wake-up-call” will not come to fruition.

It is a shame as he had a promising career that had already covered multiple titles in multiple weight divisions. He could of accomplished so much more.