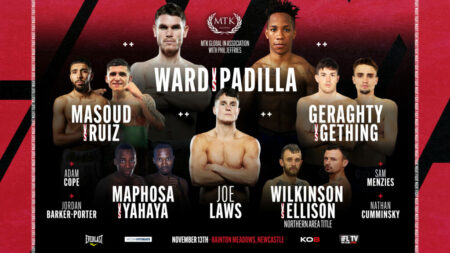 MTK Fight Night will head back to Newcastle for an action-packed event on November 13 – headlined by world-ranked Thomas Patrick Ward taking on WBA #5 Leonardo Padilla.

The card will be co-promoted alongside Phil Jeffries and be held at the Rainton Meadows Arena next month, and will be broadcast live in the US on ESPN+ in association with Top Rank, and worldwide on IFL TV.

Undefeated Ward (30-0-1, 4 KOs) is back following his win over Edy Valencia Mercado in June, as he looks to build on his current rankings of #3 with the WBO, #8 with the IBF and #11 with the WBA and move a step closer to a world title shot.

Standing in his way is fellow highly-ranked fighter Padilla (20-3, 14 KOs), with the hard-hitting Venezuelan dangerman attempting to spoil the party and come out on top against the local favourite.

In the co-main event, unbeaten rising star Shabaz Masoud (8-0, 2 KOs) has a huge step up in competition, as he goes up against Diego Ruiz (23-3, 12 KOs), who previously fought Michael Conlan in Belfast back in 2019.

Some of the best local talent will also be on display on the undercard, as Jordan Barker-Porter (1-0), Adam Cope (1-0), Sam Menzies (2-0), and debutant Nathan Cumminsky all compete.

MTK Global Promoter Lee Eaton said: “We’re delighted to head back to Newcastle and work alongside Phil Jeffries to put on a stacked card next month. We’ve had some memorable nights in the North East in the past and I’m sure it will be more of the same in November.

“The main event sees two fighters with high world-rankings in Thomas Patrick Ward and Leonardo Padilla going head to head, and Ward will be looking to secure another impressive win that can potentially set up a world title shot in 2022.

“Shabaz Masoud is having a massive step up in just his ninth professional fight against Diego Ruiz, and it will be a clear sign to see just how talented he potentially is. It’s brilliant to have Joe Laws back as well, and we’re sure he’ll bring another passionate army of fans with him.

“Declan Geraghty vs. Kieran Gething is a great fight on the card, and with the likes of Joe Maphosa, Terry Wilkinson, Jordan Barker-Porter, Adam Cope and even more all fighting too, it’s certain to be a can’t miss event.”