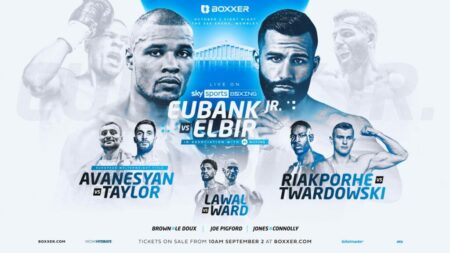 Several MTK Global stars will be in action when Sky Sports resume their boxing schedule with two action-packed shows next month.

It begins on Saturday 2nd October at the SSE Wembley Arena, with BOXXER and Wasserman Boxing co-promoting an event that sees Liam Taylor challenge David Avanesyan for his European welterweight title.

Taylor (23-1-1, 11 KOs) was last in action in July, stopping Tommy Broadbent in the first round, following on from an impressive unanimous decision win over Darren Tetley in a fight of the year contender in August 2020.

He now faces Avanesyan (27-3-1, 15 KOs), who stopped Josh Kelly in February to make the third successful defence of the European title he won back in 2019.

Attention then turns to Saturday 16 October at the Utilita Arena in Newcastle, as Hughie Fury faces Christian Hammer in a heavyweight showdown, while Savannah Marshall defends her WBO middleweight title against Lolita Muzeya.

Fury (25-3, 14 KOs) last competed in December, defeating Mariusz Wach by unanimous decision, and now turns his attention to Hammer (26-7, 16 KOs), who has shared the ring with the likes of Tyson Fury, Alexander Povetkin and Luis Ortiz in his career.

Marshall (10-0, 8 KOs) is making the second defence of the world title she won with a stoppage victory over Hannah Rankin in October, going up against fellow undefeated fighter Muzeya (16-0, 8 KOs).

Elsewhere on the card, local hero Lewis Ritson makes his return to the ring, plus Mark Dickinson makes his highly-anticipated professional debut.

Ex-British champion Ritson (21-2, 12 KOs) is hoping to return to winning ways after coming up short in his world title final eliminator against Jeremias Ponce in June.

Former amateur star Dickinson enters the paid ranks for the first time, looking to repeat the fantastic success he had during his time with the GB squad.

Even more MTK Global fighters are set to compete on the two cards, with more fights scheduled to be announced in the near future.