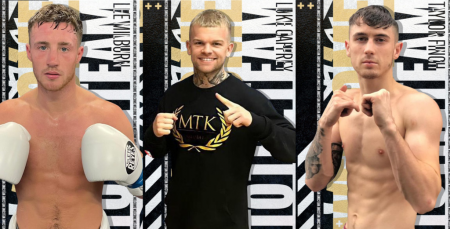 MTK Global is delighted to announce the signings of Lee Milburn, Luke Caffrey and Taylor Finch ahead of their plans to turn professional.

The exciting trio will see their careers guided under the tutelage of MTK Manchester’s Johnney Roye, having all had success during their time in the amateur ranks.

Milburn’s accolades include becoming a three-time National Champion and representing England. Caffrey won 44 out of his 52 amateur contests, claiming six Regional Championships in the process. Finch is looking to continue the promising start he made as an amateur, as he follows in the footsteps of his father Alvin Finch.

Each boxer looks set to take the paid ranks by storm in their respective careers, and they are all excited for the future alongside MTK Global.

Milburn said: “It’s a dream come true to sign with MTK Global, who are the leaders of world boxing. It feels very surreal to be under the same banner as the biggest names in the sport, so I’m grateful and ready to make my own mark in the boxing world.

“My dream in boxing is to win world titles and become a household name under the best management company in the world. I’ll be trained by Jordan Williams and fans can expect to see excitement, skilful and spiteful performances from me.”

Caffrey said: “It’s an honour to join MTK Global and to be on this platform so early on in my career. I just can’t wait to show the world how great I can be, and I am extremely grateful for the team I have around me. With Johnney Roye as my manager we believe we can really make some noise.

“A lot of people really enjoy my style of boxing as I just adapt to the fighter in front of me and can change from several different styles in a round. I’d say I bring finesse, boxing and punching ability, plus calm and effective aggression whenever I decide to turn it up.”

Finch said: “MTK Global was the only company that I felt that will give everything to take me to the top. I’ve boxed for three years after my father was a professional boxer, and I trained at Windermere Amateur Boxing Club with my coaches Gary Tomlinson and Greg Meschino, so now I’m excited to get going.”

News on when Milburn, Caffrey and Finch will make their respective professional debuts will be announced in due course.

Joe Joyce: This will still be a huge year for me Lawrence Newton defeats Mario Hernandez for NABA title in Florida