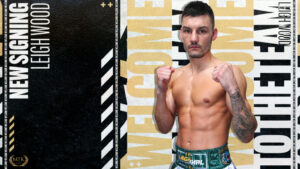 MTK Global is delighted to announce an advisory deal with British featherweight champion Leigh Wood – ahead of a huge fight for the Nottingham star later this month.

Wood (24-2, 14 KOs) has firmly established himself as one of the most exciting fighters in Britain in recent years, earning stoppage wins over the likes of Ryan Doyle, David Oliver Joyce and Reece Mould.

The 32-year-old also competed in the Golden Contract tournament in 2020, and now currently trains under Ben Davison at the MTK Performance Centre, alongside the likes of Josh Taylor and Lee McGregor.

A massive fight for Wood is expected to be announced shortly, and the man known as ‘Leigh-thal’ is pleased to be teaming up with MTK Global in an official capacity.

Wood said: “I’m very pleased to have this advisory deal with MTK Global. They represent the best fighters in the world and it’s great for my name to be amongst them.

“I’ve enjoyed the experience with MTK Global ever since the Golden Contract tournament. They looked after me extremely well, and I’m also thankful to Lee Eaton for playing his part in getting me the British title shot, so I’m looking forward to working with them on a longer basis.

“I’ve been training with Ben Davison at the MTK Performance Centre since before my last fight too, and that has been crucial to my development. It’s the change that I needed, and I can’t thank the guys down there enough for helping me push towards the elite level.

“It’s also been a big benefit to me to be training alongside other world class fighters. In the past I would usually train on my own by myself, but now I have that competitive nature to training. Whether it be running, sparring, or even just pads, it’s good to push each other.

“I’ve got a big opportunity coming up in my next fight that I’m extremely grateful for, and I’m going to grab it with both hands.”

MTK Global Promoter Lee Eaton added: “We are proud to welcome Leigh Wood to the team on an advisory deal. It has been a privilege to work with him ever since the Golden Contract tournament, and now we can take the relationship to the next level.

“We’re pleased to be working alongside Dave Coldwell to help guide Leigh’s career, and with a huge fight set to be announced soon for him, the future looks extremely bright.”