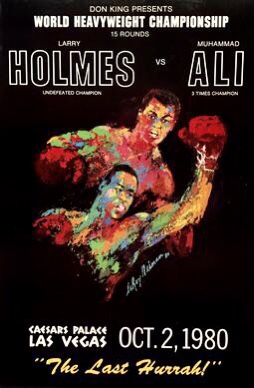 Muhammad Ali vs Larry Holmes – a fight that should of never taken place.

Muhammad Ali vs Larry Holmes was billed as the “Last Hurrah”, Muhammad Ali came out of retirement to face the new unbeaten champion Larry Holmes. Ali was attempting to become a four time heavyweight world champion having retired after regaining the title from Leon Spinks on 15/9/78 (he had previously lost the title to Spinks on 15/2/78.

Ali was way past his best and the onset of Parkinson’s disease had already started, visible from a simple walk back to his corner (in the Holmes fight) after the referees instructions. 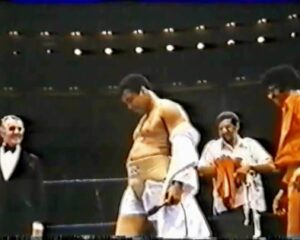 There was usage of diuretics by Ali in the lead up to the fight in an attempt to keep his weight down, having to lose a rumoured three stone. The weight came off but as his trainer Angelo Dundee said, “light isn’t right.” Ali’s speech was also noticeably slurred.

Training was poor. It is not exactly known how he was able to pass the medical as the reports from the training camp were alarming. Maybe money talks? He was passed and the fight went ahead against Holmes who was Ali’s ex sparring partner. Holmes had won the vacant World Boxing Council’s heavyweight title against Ken Norton in a fantastic fight (in our video section), he was at his peak and was making his eighth defence of the title.

So the fight started with Ali hardly throwing a punch in the first round let alone the whole bout, but it was the only round where Ali had any form of ‘bounce’ to his movement. Many had flocked to hopefully see the Ali of old but at 38, it was not to be. Ali was poor and a steady beating took place. 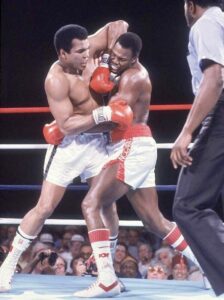 Round after round, punch after punch, Ali refused to go down. One thing that he still had left in him was his punch resistance but unfortunately nothing else. The fight got to a point where Holmes did not want to punch him no more, feeling sorry for his former charge.

Finally, after rounds of continual punishment, Angelo Dundee stopped the fight, not allowing Ali out for the eleventh round. Ali looked a sad state and far from his days of one of the best heavyweights in boxing. Holmes had won every round on all three judges scorecards.

Ali retired once more only to return again fourteen months later (11/12/81) for the last fight of his career against Trevor Berbick in the “Drama in Bahama” -you will hear a cowbell being rung in-between rounds as the proper bell was not brought to the fight.

Ali sleep-walked through the ten rounds losing remarkably on points in a fight many thought he won. It was a close decision and finally the end of his career.

It was a better fight to finish his career on but many wished he had not fought Holmes. It was a beating he took at a time where his physical state was in rapid decline.

What a remarkable career it was from “the greatest.”  Muhammad Ali vs Larry Holmes, a fight that should have never happened.

Remember to fully explore our boxing website, it has the latest boxing news & boxing results on the homepage.