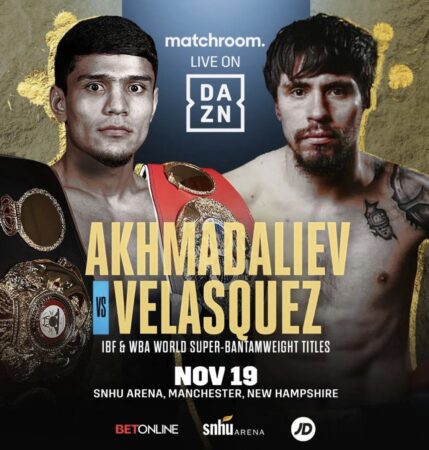 Murodjon Akhmadaliev will now defend his WBA and IBF World Super-Bantamweight titles against José Velásquez at the SNHU Arena in Manchester, New Hampshire on Friday November 19, live worldwide on DAZN, after Ronny Rios was forced to withdraw with COVID.

Akhmadaliev (9-0 7 KOs) puts the belts on the line for the second time in New Hampshire having ripped them from former ruler Daniel Roman in Miami in January 2020 and defended them with a trademark performance of equal style and spite on home turf in Tashkent, Uzbekistan in April with a fifth round stoppage over Ryosuke Iwasa.

‘MJ’ was set to meet WBA mandatory and #1 ranked Rios, but the Californian’s misfortune opens the door for a first World title shot for Velazquez (29-6-2 19 KOs). The Chilean’s career has been on the rise since inauspicious beginnings, and the 32 year old enters the bout unbeaten in his last 21 fights and has picked up a number of regional belts in that run stretching back to 2016.

Velazquez is certain to leave it all on the line on the biggest night of his career, but with Akhmadaliev eyeing unification bouts on the road to becoming the latest undisputed champion in boxing, the 27 year old is ready to end his lengthy camp with Joel Diaz in Indio, California with another eye-catching victory.

“I hope that Ronny is feeling well, it’s a shame that he cannot face me, but it is a great chance for Jose and I am sure he will put everything into this fight,” said Akhmadaliev.

“Everything has been good in camp, it’s been a long camp with a couple of fights getting cancelled, but we’ve stayed in the gym and I’m ready to defend what is mine.

“We have a new gym, and we love it, it’s our new home. The facilities are great and there’s more room and new rings. It’s always a pleasure being in camp because Joel Diaz and the team – we’re one big family.

“We joke around and mess around, but we get great work in, we have our own language in the gym with broken English, Spanish, Uzbek and Russian, all mixed up. It’s fun but that’s because we work so hard that we make sure we enjoy ourselves when the work is done. We eat, sleep and drink boxing, the discipline is second to none.”

Gennady Golovkin faces Ryota Murata in title unification on December 29 Micky Ward: Quigley is great but Andrade is my guy