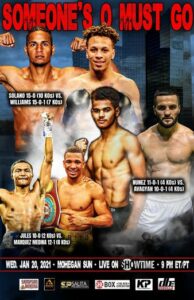 In a clash between undefeated super lightweights,

Fight Notes: Solano was down via a jab in round 8. Scores were 97-92, 96-93, 96-93 all for a for Williams unanimous points victory. Both fighters were unbeaten going into the bout.

The Pedro Marquez vs. Martino Jules 6 round bout has been cancelled due to Marquez being taken to hospital the morning of the fight. The Patrick Cora vs. Hurshidbek Normatov was also cancelled due to Normatov testing positive for COVID-19.