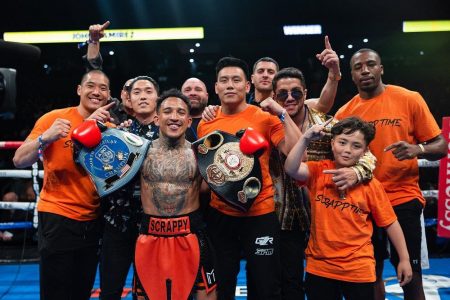 The 25-year-old Ramirez, fighting out of nearby East Los Angeles, patiently set up his Mexican opponent, Jan Salvatierra, until exploding midway through the opening round when he landed a powerful right hook that wobbled Salvatierra. Ramirez showed poise beyond his years, blinding Salvatierra with a jab and following with a straight right that landed on the button, which not only dropped his 8-1 foe, but knocked him right out of the ring in an instant Knockout of the Year candidate at 2:25 of round one.

“When you land a shot like that,” Ramirez explained, “you can feel everything. I knew it was a money shot. I was certain the fight was over right after the right hook because he pulled back. Going into the fight, I knew we were on whole different levels. He’s a good fighter who I wanted to fight on the great opportunity on DAZN.

“It feels good to win my first title belt, but I wasn’t surprised. All I needed to do was be patient, stay focused,  and have faith. Winning the title was my main focus. I’m ready to fight anybody with a belt at 115 pounds. I’m her to takeover and prove I’m the best. I’m happy that people all over the world saw me fight, but it wasn’t overnight like some said. I’ve been working hard for the past five years.”

Ramirez is an LA inner-city sports legend whose journey started on the gridiron, not in a ring, when he was a key member of the Lincoln High football team, profiled in a 2015 documentary, “ESPN 60: Letterman.” The players were from a crime-ridden section of Hollywood riddled with drugs and guns. Ramirez was a 5’ 4”, 160-pound running back on a team that, starting in Pop Warner competition, advanced to Lincoln High, which hadn’t experienced any degree success in football. Lincoln High went on to become a 3-time league champion, highlighted by its semifinal playoff appearance in his senior year, which eventually led “Scrappy” to a roster spot on the Los Angeles Valley College’s football team.

“Scrappy” has been moved on the fast track by 3 Point Management (3 PM) having fought 10 times in less than 1 ½ years. And he wants to get back in the ring as soon as possible.

“I’m ready to go,” he concluded. “I’m looking to get all the world title belts and be part of some cool things.”

Ramirez was one of four 3 PM stablemates to have their hands raised in victory Saturday night on the same card. Gilberto “Zurdo” Ramirez (44-0, 30 KOs), no relations to “Scrappy” but his mentor and friend, outclassed Dominic Boesel from the opening bell, stopping him in round four of their WBA Light Heavyweight World Eliminator. “Zurdo” is the official mandatory challenger for WBA Super Light Heavyweight Champion Dmitry Bivol , recent winner against Saul “Canelo” Alvarez.

The other two 3 PM winners were light heavyweight Kareem Hackett (10-0, 5 KOs) and lightweight Carlos Nava (8-0, 5 KOs). Hackett won a 6-round unanimous decision over Joshue Obando, while Nava knocked out Yampier Hernandez in the sixth round.