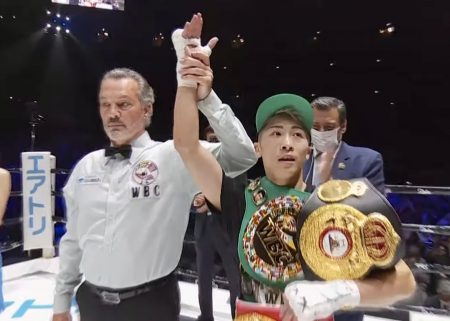 Donaire, former world champion in several divisions, came out very focused from the beginning of the fight, taking the actions to the center of the ring, while Inoue looked for spaces to land his power shots. At the end of the first round, a straight right counter dropped Donaire, who was literally saved by the bell.

In the second round, Inoue began throwing accurate and very powerful blows that hurt the Filipino. After staggering and bravely enduring the attacks, a powerful left hook sent Nonito to the canvas, forcing Mike Giffin to stop the fight and declare the Japanese as new champion.

Both warriors had already fought in 2019, in one of the best fights of that year.

Naoya Inoue improved his record to 23 wins and 20 knockouts, with no defeats. Donaire finished the fight with 42 wins and seven losses.

The event was presented by Ohashi Promotions, Teiken and Top Rank with streaming by Amazon Prime Video in Japan and ESPN in America.