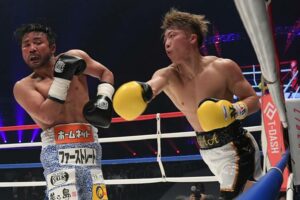 The “Legends” charity event, featuring several Japanese fighters, turned out to be a resounding success on Thursday in Tokyo, Japan. Naoya Inoue and Hiroto Kyoguchi, both World Boxing Association (WBA) champions, were part of the attraction that gathered more than two thousand people under strict biosecurity measures.

The Yoyogi First Gymnasium experienced a joyful atmosphere with the exhibitions of the great Japanese boxers, among which were also the legend Takashi Uchiyama, Daigo Higa, Akira Yaegashi, and others.

The main fight was in charge of Inoue, who took on Higa in a three-round bout in which there was a lot of action for the enjoyment of those in attendance. They fought in the short distance to have good exchanges for the public despite being an exhibition fight.

“I had to prove my superiority to Higa, as people expected. My next defense will be most probably against a southpaw (IBF mandatory challenger Michael Dasmarinas). I’d like to prepare properly, and it was good that I could show sparring sessions before the audience this time (since he previously fought Jason Moloney behind the closed doors in Las Vegas),” said “Monster” Inoue after his exhibition, according to statements taken by Joe Koizumi.

The Japanese fighters united to put on a show and support charitable causes with boxing. The WBA applauds this kind of initiatives in support of the underprivileged.