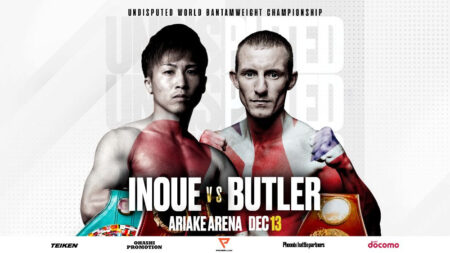 Paul Butler goes in search of boxing immortality in December when he faces Naoya Inoue for the undisputed world bantamweight title.

The WBO champion tackles Japanese hero Inoue, at the Ariake Arena in Tokyo, on Tuesday, December 13 on a historic night for the sport, promoted by Ohashi Promotion and Teiken Promotions in association with Probellum.

Inoue holds the IBF, WBA and WBC belts and wants to clean up the division before moving up in weight – but two-time world champion Butler holds the missing piece of the puzzle.

And the fighter from Ellesmere Port, in the UK, heads to the Land of the Rising Sun, fully intent on becoming boxing’s first undisputed bantamweight champion in half a century and scoring one of the biggest away wins by a British fighter ever.

Paul Butler said: “I’ve been boxing for over 20 years and all the successes and set-backs have led me here, to the biggest fight of my career, with the biggest prize in the sport on offer.

“I am under no illusions as to the size of the task that faces me, but I have been going to bed dreaming of becoming the undisputed bantamweight champion of the world.

“Inoue is a phenomenal fighter but not one person should be underestimating me, my skills, or my resolve.  I am going to Japan to write my name into the history of our sport.”

Richard Schaefer, President of Probellum, said: “It does not get any bigger than this, but Paul Butler is ready to carve out history, cause a seismic upset and return home as the undisputed world bantamweight champion.

“We all appreciate how good Naoya Inoue is, we have seen it repeatedly, but the people who really know Paul, know what he is made of and the greater the challenge, the greater his performance will be.”