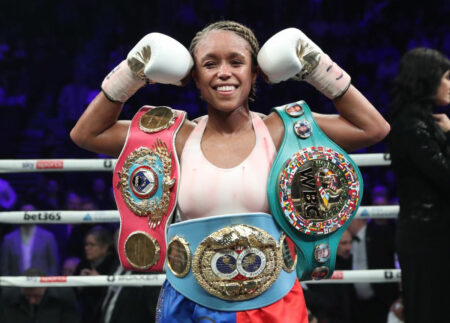 Natasha Jonas claimed her third world championship in the Super Welterweight division – along with the Ring Magazine title – to undoubtedly stake her claim to being the best woman in the world at 154lbs, and one of the pound-for-pound greatest women on the planet, in her victory over Marie Dicaire at an electric AO Arena, Manchester and live on Sky Sports tonight.

Both women came into this fight as World Champions, and both showed world championship spirit in their performances, with Jonas taking victory by unanimous decision (100-90, 98-92, 97-93) over 10 hard-fought rounds. Jonas landed big shots from the first round and had her opponent hurt at multiple points across the fight, but Dicaire fired back and didn’t stop coming forward all fight, giving the unified champion a lot to deal with.

Dicaire showed no sign of slowing down in the final rounds of the fight, and pushed Jonas back up against the ropes and fired off ferocious hooks to the body. Jonas was forced to use all of her skill and boxing ability to handle the torrent of offense coming towards her in the second half of the fight. That skill and the rounds she claimed in the early portion of the fight was enough to secure the victory for Jonas on the judges’ scorecards.

Jonas, the first woman to fight for Team GB at the Olympics, failed to claim a World Championship on the first two attempts of career, but has shown stunning heart and determination to win three over the last 9 months, and has now established herself as the best fighter in the world at a weight class 24 lbs heavier than where she first fought for a world title.

“As a boxer you’re never fully happy with your performance, it’s why you keep developing, go back to camp and are getting better. But I won, she was No 1 in the division and I’ve firmly established myself as a super-welterweight champion,” she said afterwards.

British super-lightweight champion Dalton Smith retained his title in an even, well-matched fight that went the full 12 rounds. Kaisee Benjamin gave Smith a hard 36 minutes, being evasive and awkward from the first to the last bell, and finding moments to land on Dalton Smith with powerful shots. But Smith just did more, using aggression and speed to nick enough rounds to take victory.

The fight was a 12-round chess match between two massively talented fighters who could both be in big fights in the future. Both men neutralised a lot of their opponents offense, refusing to allow themselves to be hit with combinations.

Smith’s workrate was slightly higher across the 12 technical, highly-competitive rounds, but the elusive Benjamin’s head movement and occasional switches  to southpaw allowing him to avoid taking significant damage.

This was an enthralling fight for educated boxing fans and both fighters staked valid claims to be competitors at the highest level.

Olympic Bronze medalist Frazer Clarke gained six educational rounds against the benchmark for heavyweight prospects in Kamil Sokolowski, who had to use every trick in the book to survive the heavy-handed man from Burton.

Clarke cycled through the gears well, picking up the pace in the second half of the fight and finding the target with his shots more often.

Clarke wove uppercuts into his offense effectively and managed to work around Sokolowski’s tight guard and tendency to tie up his opponent in the clinch, switching his offense to the body when the opportunity arose. Caught by very few punches during the fight, he deservedly won every single round on the referee’s scorecard.

This was a vital experience for one of the most exciting and charismatic heavyweight prospects in the UK in Frazer Clarke, who looks set to follow in the footsteps of similar Team GB Olympic Super-Heavyweight medalists Joe Joyce and Anthony Joshua, and reach the very top of boxing’s blue riband division.

English middleweight champion Tyler Denny successfully retained his championship in a fight many predicted would steal the show, and delivered on that excitement. Denny oozed confidence across the fight, firing off shots at will and managing the range of the fight expertly, despite Bradley Rea’s size advantage.

However, in the 9th round, after dominance from Denny, Bradley Rea found a devastating right hand to the body that left Denny almost incapacitated in the ring, allowing Rea to fire off and come within seconds of finishing the fight several times. Denny survived that onslaught and went on to take victory on the judge’s scorecards.

After a tight 1st round, Denny had huge success in the 2nd with a clutch of brutal straight left hands that stunned Rea. Bar the pure carnage of the 9th, the defending champion never looked in trouble, generally being in control of the pace throughout the fight.

Rea showed great heart and didn’t give an inch in front of his hometown crowd, giving Denny a massive scare in the penultimate round, but came up short in the end. Bradley Rea took a huge step up in this fight, and at only 24 years old, he looks set to come again soon.

Another impressive knockout victory for the talented and popular cruiserweight Viddal Riley to maintain his undefeated professional record. Riley walked down and stopped a taller, awkward opponent in Ross McGuigan.

Viddal pushed forward all fight long, but used a strong guard and evasive head movement to protect himself from taking any damage in the process.

Eventually he pinned McGuigan against the ropes, crunching a right hook to the body and then capitalising on that opening to knock McGuigan down with a looping, overhand right to the head.

Viddal Riley is one of the most exciting prospects in the UK at 200lbs, and looks set to win titles in 2023.

Both men hurt their opponent multiple times in the fight, with one moment where both men landed brutal shots that rocked the other at the exact same time being a summation of the 12 minutes of carnage as a whole.

Jordan Ellison showed himself to be far better than his record suggests, and stood up to Cheema’s aggressive style and fast footwork. The fight could have easily been scored either way, but that only lays the path for a potential rematch over more rounds in future.

Clark Smith successfully moved to 3-0 in his professional career, still having failed to lose a round, in a measured, intelligent performance. Smith varied his offense across the four rounds of the fight, mixing long jabs with battering hooks to the body for a dominating performance against a veteran opponent in Dale Arrowsmith.

Smith pushed hard in the final round to find a stoppage, landing a lot of shots across the round, but had to settle for another flawless points victory in front of his hometown fans.

Jack Kilgannon opened up the night’s action with a action-packed 6-round victory over an opponent who came to win in Meshack Mwankemwa. Kilgannon had success with his jab and worked in some powerful uppercuts in the first two rounds of the fight, but Mwankemwa kept coming forward with aggression, consistently launching clubbing hooks to the body and overhand rights.

This peaked in the 4th round where Mwankemwa landed a barrage of shots that left Kilgannon seriously hurt and reeling. After this Kilgannon smartly moved to a longer-range, boxing style, comfortably winning the last two rounds off the back of a disciplined jab and a well-deployed straight right hand.