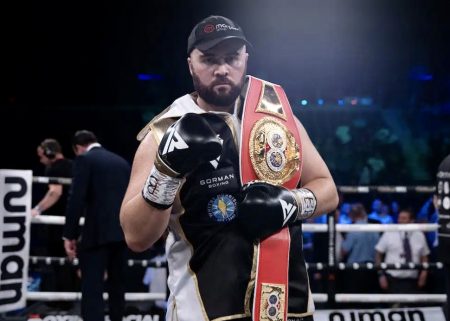 Nathan Gorman powered his way to the IBF International Heavyweight Championship as he twice downed his opponent in a punishing first-round stoppage of Tomas Salek at the M&S Bank Arena on Friday June 17, live on Channel 5. Stoppages were the theme of the main card as ‘Pretty Boy’ Josh Kelly reminded everyone of his class and technical ability in a fourth-round TKO victory over the Hungary’s Peter Kramer.

With his name upon the banners, Nathan Gorman did not disappoint the Channel 5 audience and all those in attendance at the M&S Bank Arena on a fantastic Wasserman Boxing fight night. Gorman had a job to do after 15 months out of the ring, but had clearly been working on all the physical and technical aspects of his game to overwhelm is Czech opponent.

The pressure on Gorman intensified as his cousin and WBC Heavyweight king, Tyson Fury, entered the arena in typically flamboyant style. ‘The Gypsy King’ would not be left disappointed, as all of the improvements made by Gorman left Tomas Salek stunned once the first heavy blow had been thrown.

After applying pressure from the first bell, Salek got caught with a heavy shot to meet the canvas a little earlier than planned. The referees count was reluctantly met by the Czech Heavyweight champion, only for Gorman to scythe him down once more with another brutal punch.

“It’s been a fantastic night,” said Gorman. “What a way to come back to the boxing ring.”

“Tomas Salek has only lost to good fighters, but I think I’m the only one to do it in that impressive style. I’m really happy and really pleased with it, live on Channel 5 as well so hopefully there were plenty of happy people watching.”

“It’s now about being active. I’m only 25-years-old, but I want to keep pushing on and hunting for them titles. There’s a hell of a long career ahead of me yet, and there’s big things to come.”

The wait was finally over as the Liverpool crowd stood to cheer Josh Kelly back to the squared circle for the first time in over a year. The fluid and natural boxing that Kelly has been renowned for showed no sign of rust as the Sunderland man looked even more focused and spiteful than he had previously.

His opponent, Peter Kramer, had shown up to become a banana skin and use his durability and experience to spoil the party. This was not the case, as Kelly wore the Hungarian down with a blend of speed, movement and some hard-hitting uppercuts that inevitably saw the referee wave off proceedings in the fourth round.

“Nothing ever replicates fight night – training for it, travelling away to arenas, preparing in the changing rooms. Nothing replicates it,” said Kelly.

“Round after round, I could feel myself getting sharper and I started reading him a lot better. I wanted to put a statement out there with my jab, and it worked well tonight to break him down to the point he started taking a few too many shots.”

“I was saying to Adam (Booth) that I’m going to land a right-uppercut on this guy. When they started landing and doing the job, I thought if he’s going to just sit there and take it then I’m just going to keep giving it to him.”

“He goes the distance with heavier guys normally, like Super-Middleweights. To hurt him, and make him physically shaken, shows what strength and power I carry at 154lbs.”

Chloe Watson avoided any slip-up in her homecoming fight, as the city of Liverpool cheered her on to victory. Watson’s opponent, Fara El Bousairi, had been described as a very game opponent all week and someone to push the young fighter. It was an accomplished performance that saw Watson get over the line with a 59-56 points win.

Elsewhere on the card, it was a successful debut for Aaron Chalmers as he passed the test with a 39-37 points victory over Alexander Zeledon. There were plenty of signs to show the potential of Chalmers and his entry into the sport, with the former Geordie Shore star looking comfortable in heavier gloves having swapped the cage for ropes.

BCB Promotions “Vengeance At The Venue II” full results from Dudley BOXXER Break Through: This Saturday in Coventry